ECB to sit tight ahead of high-risk elections 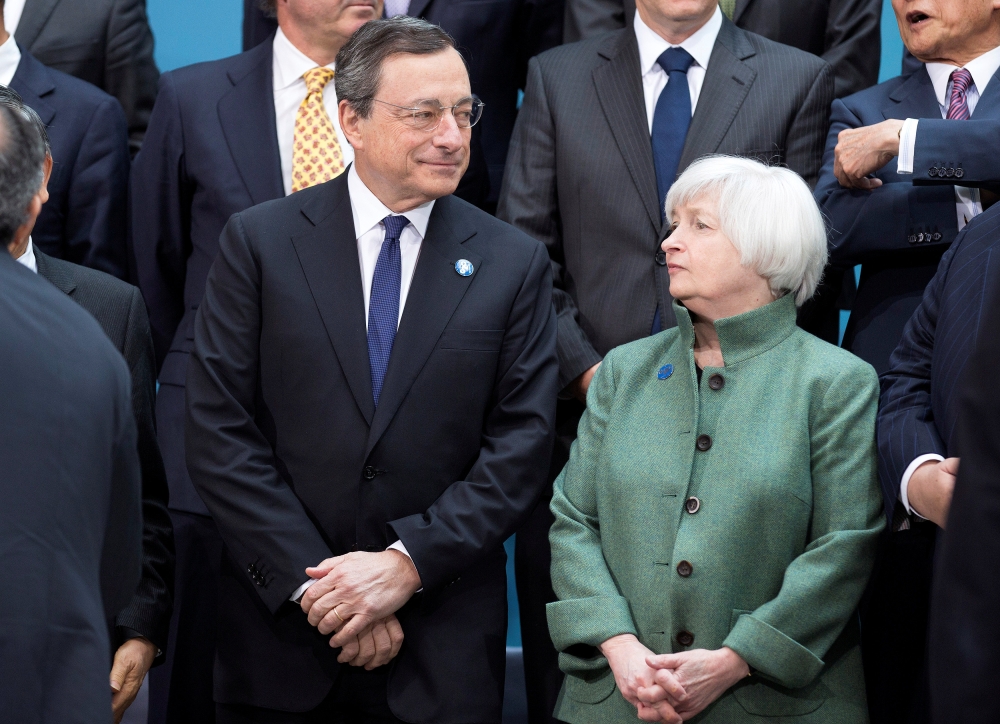 Frankfurt: The European Central Bank is set to keep monetary policy on hold on Thursday as it casts a nervous eye ahead to high-risk elections in France and the Netherlands during an upsurge in populist sentiment that threatens to derail the recovery.
Although economic growth and inflation are both picking up, the ECB is expected to resist calls to tighten policy, pointing to political risks, weak underlying price growth and a still fragile recovery nearly a decade after the bloc's economic woes began.
For once, the outlook is improving. Economic sentiment is at a six-year high, trade is rebounding, services and manufacturing output are rising, and unemployment is at its lowest since 2009, suggesting the economy is in its best shape in all that time.
Even inflation, the ECB's key objective, has rebounded, essentially hitting the bank's target last month.
"The fast improvement in economic data and an energy-driven jump in inflation to 2 percent are probably enough for ECB President (Mario) Draghi to consider throwing a bone to the hawks of the Governing Council and start sounding less dovish," UniCredit economist Marco Valli said.
Indeed, German banking association BdB and the Ifo economic institute both called on the ECB on Thursday to start preparing the ground for the end of ultra-easy monetary policy, adding to a long list of powerful names demanding an ECB retreat.
For Draghi, it will be walking a tightrope. While acknowledging the positive economic developments, he is likely to keep arguing that the inflation surge is temporary, growth is fragile, and the outlook is clouded with risks.
These include -- within weeks -- the Dutch and French elections and the first meeting of G20 finance leaders since U.S. President Donald Trump took office.
Economists in a Reuters poll said the ECB's next move will be either a tweak of its guidance in the second half of this year or a gradual reduction in its asset-buying next year.
"An important reason for not taking any hasty action is the ECB's own track record of jumping the gun," ING economist Carsten Brzeski said. "In 2007/8 and 2011, the ECB hiked rates, the first based on German wage increases and the second when the worst of the euro zone debt crisis seemed to be over.
"Both times, the ECB was taught a lesson. It seems unlikely that the ECB would want to jump the gun for a third time, particularly not on the eve of two important elections in the euro zone."
The central bank will announce its policy decisions at 1245 GMT, and Draghi holds a news conference at 1330 GMT.
The bank's deliberations may be heated. The rebound in inflation particularly has fuelled calls in Germany, the 19-member currency bloc's biggest economy, to scale back its 2.3 trillion euro bond-buying programme or at least start drawing up plans to wind it down.
But at best the central bank may bump up some economic forecasts, particularly for inflation. It may also drop its reference to downside economic risks and let an ultra-cheap borrowing facility for banks expire as scheduled.
It may also debate but likely reject calls to give up a reference to lower rates or higher bond buying if necessary.
Markets were relaxed ahead of the meeting with 10-year German yields inching up just 3 basis points and the euro broadly steady.

The French election is likely to be particularly concerning, even if Draghi may be reluctant to admit it. With far-right candidate Marine Le Pen wanting to take France out of the euro zone, markets are already bracing for a shock.
Indeed, the cost of insuring French government debt against default is up sharply, with five-year credit default swaps on French debt doubling since the start of the year. And the spread between five-year French and Germany bonds rose to its highest since 2013 last month.
Any turmoil would likely hit the periphery just as hard, and spreads in places like Italy and Portugal are also on the rise, even as the ECB's main indicator of stress in the financial system is trending downwards.
Next weekend's G20 meeting in the German town of Baden-Baden may complicate policy further. The world's top finance ministers and central bankers may no longer explicitly reject protectionism or competitive currency devaluations, according to an early draft of the communique, after the U.S. has accused some trade partners, particularly Germany, of exploiting a weak currency.
Nevertheless, policymakers have so far suggested that the ECB is only likely to begin discussing its next policy move in June, with the first actual move perhaps not coming until after German elections in September.
"From the current levels, financial markets are more vulnerable to a hawkish than a dovish tilt," Tuuli Koivu at Nordea said. "However, the recently seen favourable economic development probably starts shifting the discussion towards slightly more hawkish comments in the coming meetings."