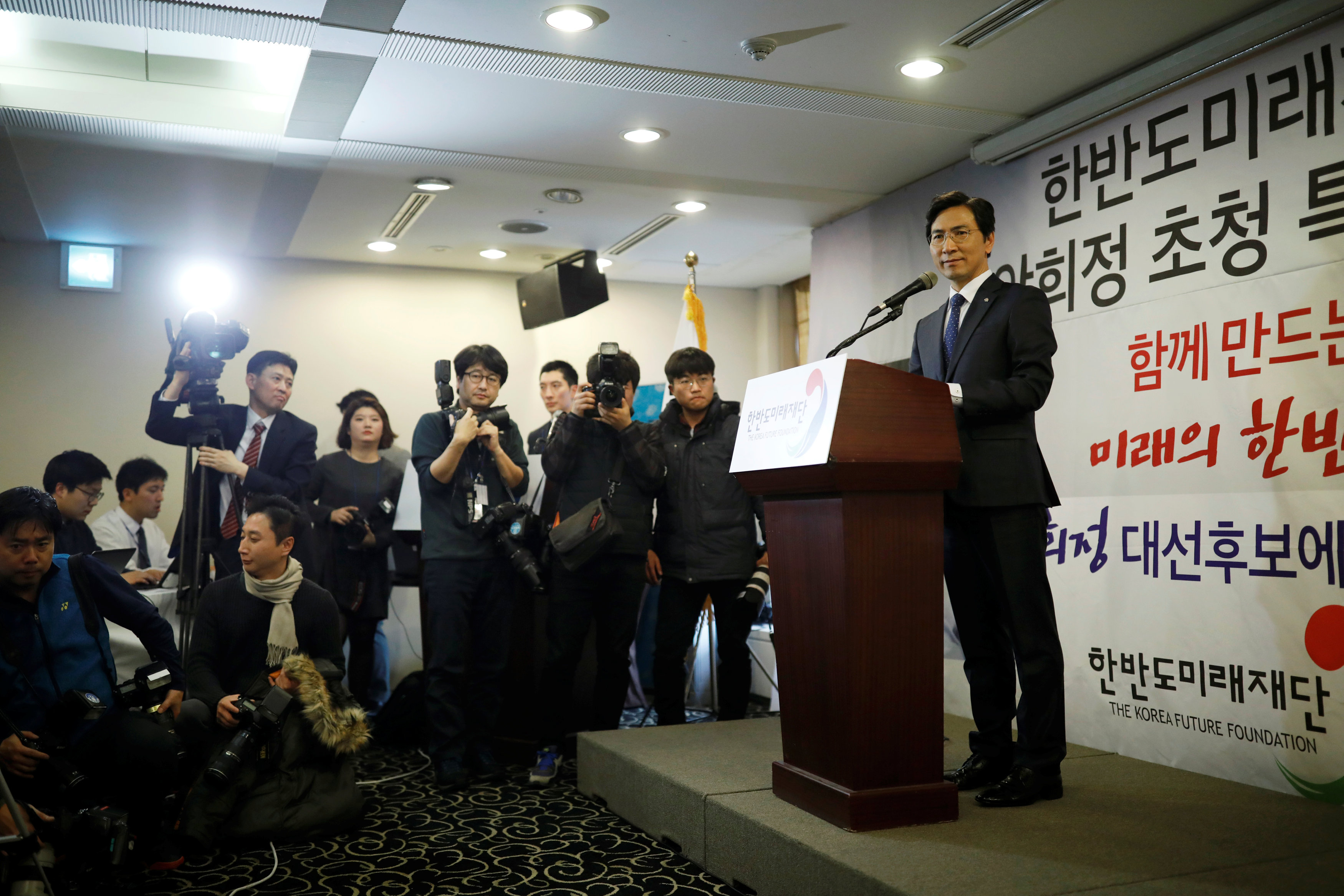 Seoul: A provincial governor nicknamed after a leading boy-band is surging in South Korean presidential polls following former United Nations chief Ban Ki-moon's announcement that he would not run in an election that could come within months.
Governor An Hee-jung is seen as a down-to-earth, uncomplicated politician, traits that could serve him well in a nation roiled by December's impeachment of President Park Geun-hye. If the Constitutional Court upholds the impeachment, an election would be held in 60 days.
"I want to be a president who would put up a basketball hoop in the yard of the Blue House and play basketball with aides," An, a youthful-looking 51, said in a recent online video interview, referring to the presidential compound.
The image is in contrast to Park, 64, who was perceived as isolated and aloof even before the corruption crisis that was to envelop her presidency erupted late last year.
None of her prospective successors has a commanding lead in polls. But An has scored the biggest increase in ratings since Ban's undeclared candidacy fizzled in January, vaulting into second place from as far back as fifth less than a month ago.
A Gallup Korea poll issued on Friday showed An closing the gap on fellow Democratic Party member Moon Jae-in, who leads 29 per cent to 19 per cent. Last week, Moon led 32-10. Gallup Korea is not affiliated with US-based Gallup Inc.
Ban was expected to stand on a moderate-to-conservative platform, while An is a Democrat but has positioned himself as a centrist. As two-term governor of South Chungcheong province, the same area Ban is from, he is picking up regional support as well as backing from older voters who tend to lean conservative.
An, who says he was tortured by intelligence agents when jailed as a student activist, has also courted younger voters who have been demoralised over job prospects in a sluggish economy and have been leading weekly rallies for Park's ouster.
He has appeared on entertainment shows, singing a hit song on one of them. His Instagram postings include a soap opera parody photo and a New Year video message featuring his cat.
Supporters have nicknamed him the "EXO of South Chungcheong," after a popular K-pop band.
An was an aide to former President Roh Moo-hyun, a liberal, while Moon was Roh's chief of staff.
To contest the presidency, An would need to beat Moon, a 64-year-old who is more left-leaning, in a primary unless he leaves the Democrats to form a coalition with others, which he has shown no inclination to do.
Still, his centrist positioning could get him support from conservatives who are lacking a clear standard-bearer.
"We need someone to unite our country," said An supporter Lee Eui-go, who runs a small business on the outskirts of Seoul.
"As a liberal he succeeded in a two-term governorship in a conservative region, which means his ability and sincerity are recognised by the opposition."
An has stressed the importance of South Korea's alliance with the United States, respecting an agreement between Seoul and Washington to deploy the THAAD missile defence system that is opposed by China.
Moon says the next government should decide on the missile defence.
An also disagrees with Moon's plan to boost employment by creating more government jobs
Married with two sons, An has an eventful past.
As a student activist in the 1980s, he was expelled from high school and imprisoned twice during college for opposing the then military dictatorship.
In 2004, An was imprisoned for violating campaign finance law during Roh's election but was later pardoned by Roh.
He was elected governor of his home province of South Chungcheong in 2010 and re-elected in 2014.
His biggest asset seems to be his ability to connect with voters.
At a recent event hosted by a conservative foundation, not a traditional support base, An drew cameras and fans seeking selfies and handshakes. During his speech, he was interrupted by cheers from a pair of middle-aged women.
"Thank you, ma'am, for the cheers. You are beautiful," An said, generating laughs.