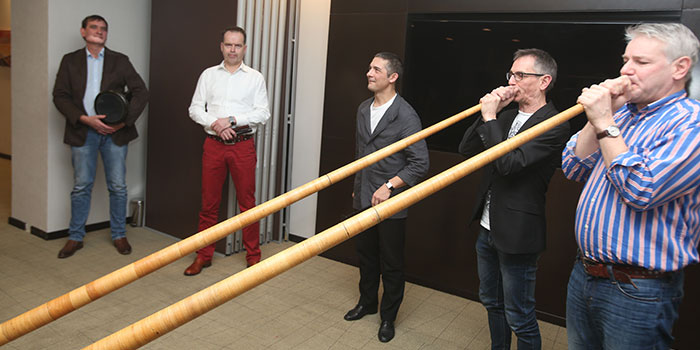 This was announced during a press conference which was held on Wednesday to announce the second concert of the third season for the “Muscat Chamber Music Series”.

The event was attended by His excellency Hans Chrsitian Freiherr von Reibnitz, the German Ambassador to the Sultanate of Oman, Ahmed Abouzahra, General manager of Arabesque International LLC and the five musicians of the German ensemble.

Abouzahra said like last season the group will be holding workshops at different schools in Muscat starting on Feb 2nd at the Muscat International School followed by a workshop at the British school on Feb 5th and also at the PDO school on Feb 7th, for the first time the in the history of the “Muscat Chamber Music Series” it will hold a master class to Omani musicians of the Royal Omani Symphony Orchestra and the Royal guard musicians.

He also thanked the sponsors “The Holiday Inn Hotel Al Seeb”, Muscat International School, Kimji Ramdas and special thanks was to the German ministry for foreign affairs represented as the German embassy in Muscat for their financial support to make this visit of the group possible.

Thomas Hoffmann from the Jacaranda said: "Perhaps the best way of approaching the Jacaranda ensemble and their music is not to expect music - or at least music in the usual, traditional sense. Rather one should prepare oneself for a reflection in sound of one's own inner resonances and moods, immersing oneself in "the sounds of nature becoming music".

Tickets will be available at the door for OMR 10.