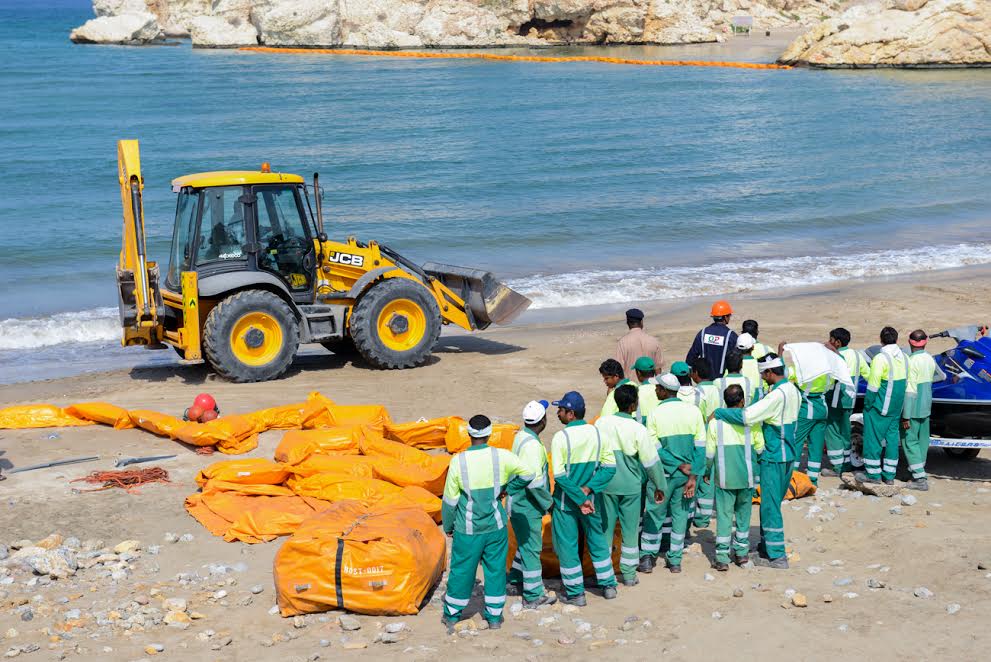 Muscat: With Oman testing its state of readiness to deal with an oil spill by carrying out an emergency response drill on Tuesday morning, emergency services belonging to both government and private organisations were required to respond at a moment’s notice in a concerted manner.
And that is exactly what they delivered: from the Royal Oman Police, which had mobilised jet-skis and amphibious vehicles, to the engineers who maintained a constant vigil throughout the drill at Shatti beach and Mina Al Fahal.
The drill had been organised by Petroleum Development Oman, in cooperation with the Ministry of Environment and Climate Affairs and Oman Petroleum and Environmental Services Company (PESCO). In place of crude oil, though, 2,000 litres of fish oil were dumped into the port at Mina Al Fahal at 8 am.
“Computer simulations had shown that this area could be affected by the oil spill,” said Aymen Naguib, the supervising engineer for PESCO, who was present at the Shatti beach site.
“The first sensitive area is one with the mangrove trees just behind us, as these are of ecological importance. If these are affected by oil, it will take years for the trees to recover and the process to clean them of the oil is even more harmful than the oil itself, so we cannot let that happen. Secondly, there is a fishing wharf here, so this area is of economic importance. If the oil gets into the fish, they will be contaminated and that can be very harmful for both the wildlife in the area and those who consume them. Lastly, the Crowne Plaza hotel and the beach next to us make this area a very important tourist location.”
While one squad of engineers began arranging their tools in a staging area a good 10 metres away from the seashore, another group began setting up dual-layer inflatable rubber barriers, which would roll with the tide and block the oil from seeping through. To ensure that these barriers remain constantly afloat, the top layer was filled with compressed air, while sea water was pumped into the bottom half.
In the meantime, another group of technicians attached a set of floating barriers to a boat, which would be pulled out to the sea and deployed near the entrance of the beach strip next to the Crowne Plaza. They would repeat the same twice more, to secure the fishing wharves and to ensure the protection of the mangroves.
Under the eagle eyes of the officials from the Ministry and PESCO, a digger began unearthing soil from the beach to set up a disposal area for any oil that reached the shore.
After a sizeable pit had been dug, a film of plastic was placed over it and then weighed down. Once collected, the resulting oil and water mixture was first placed in a centrifuge, and while the water was set to an effluent plant, the oil was treated at the PDO centre in Mina Al Fahal. This mixture was transported in tankers that were deployed solely to carry waste oil.
Also present at the event was Maya Wilson, Research and Conservation Manager at the Environmental Society of Oman.
“This is a very important exercise as it has brought together different organisations from the government and the private sector,” she said. “Some of them don’t have training when it comes to dealing with an oil spill. Therefore, it is very essential to know how to behave and react during an emergency such as this. It’s a learning process for everyone, because if oil impacts the environment, it could take decades to recover.
“It is very important for all countries to have such measures, especially if oil and gas are a priority industry,” she explained. “Oil and gas are extremely important to Oman’s economic well-being and income. Hence, it was very important exercise to carry out this exercise. Everybody must be prepared to organise a swift response.”