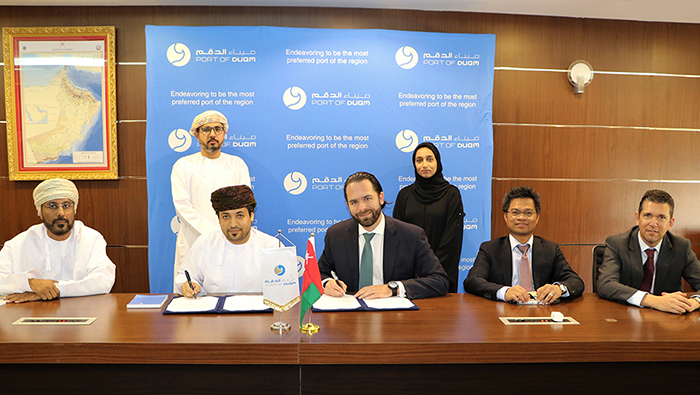 Muscat: NIMR International (NIMR) and the Port of Duqm Company signed a long-term bunkering agreement to supply bunkers at Port of Duqm.
NIMR shall be operating its dedicated bunkering barges with a total capacity of 5,000-tonne at the Port of Duqm in the initial stage, supplying MGO, VLSFO and marine lube to vessels calling the port and its dedicated anchorage areas. At a later stage, the company shall be adding another bunker barge with a capacity of 7,000-tonne as the volumes pick up at the port.
NIMR International, who has been supplying bunkers already at Port Sultan Qaboos, will have a dedicated desk for receiving bunker inquiries and accordingly execute orders in a timely manner. The company has been steady in growing its marine business and maintaining to build a good reputation in the market for safe deliveries and up to international standard services, providing high-quality marine fuels and lubes. The company being an Omani local company will contribute to the economy of the country and commit to supporting the future developments and strategies of the Port of Duqm Company.
“Nimr International plays a very important role in transforming the bunker supply business into the Sultanate of Oman which has been dominated by internationally acclaimed players. It is a milestone and real privilege for our company to work with The Port of Duqm in promoting the bunkering services to Port of Duqm. We are looking forward to increasing our market share by adding value into the chain,” said Mahmood Al Habsi, Managing Director (NIMR). “We are happy to be strategically aligned with the Port of Duqm Company in developing bunkering services and we believe that bunkering in Port of Duqm will gather traction of increasing number of ships calling the port which will then contribute to the economy of the Sultanate of Oman,” he added.
Reggy Vermeulen, CEO of Port of Duqm added, “Port of Duqm is seeking to increase its activity level exponentially in the years to come and is ambitious to become a major hub, for the handling of containers, RORO, project and breakbulk cargo, liquid & dry bulk cargoes. This new agreement with NIMR International underlines the clear ambition of Port of Duqm to become a future bunker hub serving the entire region. Port of Duqm takes full advantage of its strategic location as well as the availability of the right fuel specs and offer prime bunker services accordingly.”