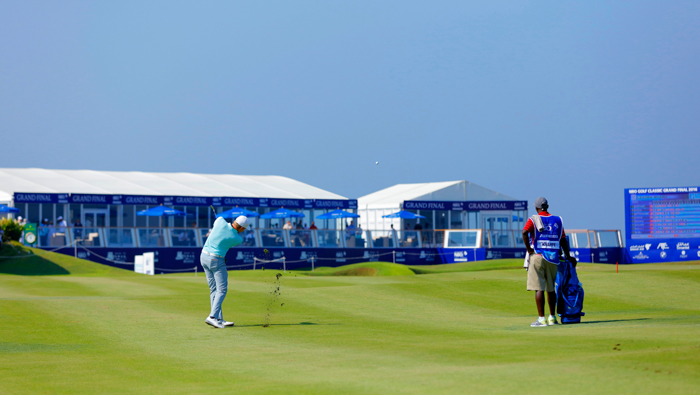 Muscat: It has been fun for all the family so far at the NBO Golf Classic final in Oman. With family fun zones and coaching areas for children, the event has been popular with visitors of all ages.
The family themed fun event boasts a public village aimed at attracting visitors who can enjoy watching golf with some family entertainment. It will feature Jungle Book characters, golf simulation games and professional training in golf to young and adult visitors.
Meanwhile, German Bernd Ritthammer has been notching up some incredible scorecards in the run up to tomorrow's final day of the NBO Golf Classic at Al Mouj, Muscat.
Rithammer is leading the pack heading into the final day and is guaranteed a European tour card next year. A 6-under round propelled him to the top of the leaderboard.
The National Bank of Oman Golf Classic Grand Finale is being held from 2nd November- 5th November at Al Mouj Golf. 45 players from the Challenge Tour ‘Road to Oman’ are taking part in the event.
The final round starts at 8am tomorrow and runs to 2:30pm.
Ritthammer is two shots ahead of his nearest rival, Matthieu Pavon from France, with Alexander Bjork from Sweden in third place.
NBO brought the Challenge Tour to Muscat in 2013 and has completed two successful tournaments. The third event has established itself as the NBO Golf Classic Grand Final, held at Al Mouj Golf course annually.
First held in 1987, the European Challenge Tour has become an established stepping-stone for future champions. Golfing stars are able to hone their skills over 72-hole competitions, with the aim of fulfilling their dream of playing on the next European Tour.