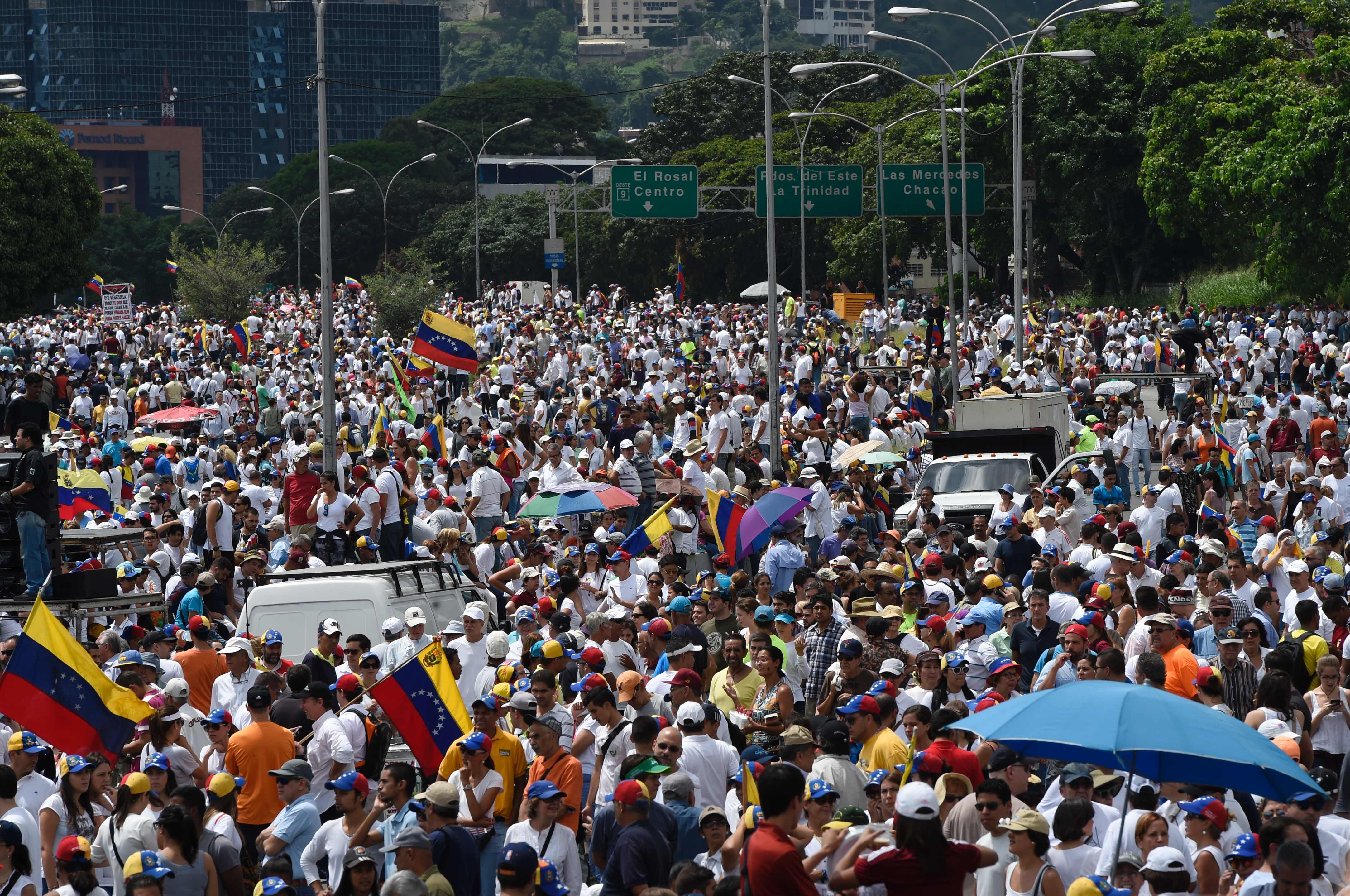 Caracas: Opposition supporters rallied throughout Venezuela on Wednesday against unpopular socialist President Nicolas Maduro, whom they accuse of turning into a dictator by preventing a plebiscite to remove him.
The oil-rich South American country is in the throes of a punishing recession that has many poor families skipping meals or surviving on starches amid scarce food and triple-digit inflation.
The opposition coalition says Maduro must go before the situation worsens, but Venezuela's electoral authorities last week cancelled a planned signature drive to hold a recall referendum against him, citing fraud.
An enraged opposition said Maduro, a former bus driver and union leader who narrowly won election to succeed Hugo Chavez in 2013, had crossed the line.
After launching a political trial against him in the National Assembly legislature on Tuesday, the coalition organised marches called the "Takeover of Venezuela" in all major cities on Wednesday.
"This has gone too far. I do not like confrontation, but we have been too compromising and soft with the government," said carpenter Grimaldi Lopez, 50, carrying a large Venezuelan flag covered in the signatures of well-known opposition leaders.
"The referendum was our constitutional right, and they have denied it. What are they scared off?," he added at a Caracas rally, echoing the opposition accusations that Maduro has leant on compliant electoral and judicial authorities to block the plebiscite.
Roadblocks by security forces were delaying some opposition supporters from entering the capital, while underground transport stations were also closed in an apparent tactic by authorities to impede the demonstrations.
Wary of trouble, many businesses were staying shut and some parents were keeping children away from school. Some protesters brought vinegar and makeshift masks to use in case of teargas.
"I'm willing to give my life for Maduro to go," said 80-year-old Jose Perez, marching in the western city of Maracaibo.
Just back from a tour of major oil-producing countries plus meetings with the Pope and UN Secretary General-designate Antonio Guterres, Maduro counters it is in fact the opposition vying for a coup beneath the veneer of peaceful protests.
Chavez was briefly toppled in a 2002 putsch, when some of the current opposition leaders played key roles.
"Some want to see Venezuela violent and divided," a red-shirted Maduro told cheering supporters at a rally on Tuesday, where he vowed to stand firm. "They won't return! The revolution will continue!" he said, pumping his fist.
Opposition protests two years ago led to 43 deaths, including security officials and both government and opposition supporters. As a result, some Venezuelans are wary of demonstrations or see them as futile.
And Venezuela's poor have to prioritise the all-consuming task of finding affordable food, while many remain skeptical of the opposition, which has a reputation for elitism and whose internal squabbles have for years been a boon for "Chavismo."
In some places lines outside stores were bigger than the opposition gatherings early on Wednesday.
Maduro said he was convening a special Committee for the Defense of the Nation at the presidential palace on Wednesday, to analyse the National Assembly's actions against him and a tentatively scheduled dialogue with the opposition this weekend.
National Assembly head Henry Ramos, a veteran politician who swaps insults with Maduro almost daily, declined an invitation to attend.