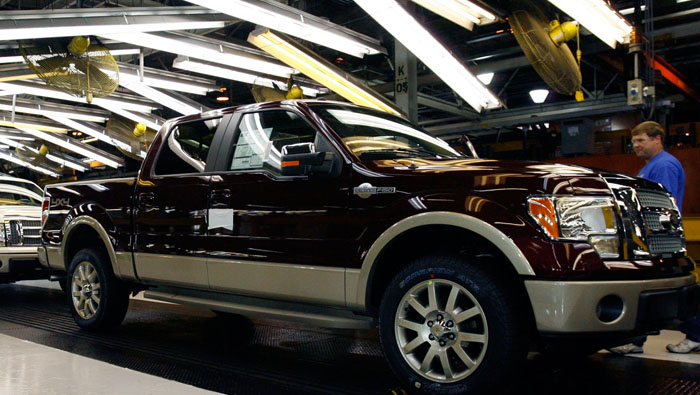 Michigan: Ford Motor is temporarily halting one of two plants that builds the top-selling F-150 pickup as it idles four factories this month amid slowing United States auto sales.
This week, Ford is shutting its Louisville, Kentucky, factory building the Escape and Lincoln MKC sport utility vehicles, as well as two plants in Mexico that make the Fusion sedan and Fiesta subcompact, according to an e-mailed statement.
Next week, the second-largest US automaker said, it will close the F-150 factory near Kansas City for seven days. And starting October 31, the Louisville plant will be idled for another week, Ford said.
The plant closings follow last week’s shutdown of Ford’s Mustang factory in Michigan after sales of the sports car plunged 32 per cent in September. The US auto sales are slowing as many analysts predict the industry won’t match last year’s record of 17.5 million cars and light trucks. Ford chief executive officer Mark Fields has said the US auto market has plateaued and that showroom sales are weakening.
“We said we expected the overall retail industry to decline in the second half of the year,” Kelli Felker, a Ford spokeswoman, said in the statement. “We also said to expect to see some production adjustments in the second half — this is one of them.”
F-series sales fell 2.6 per cent last month as a pickup price war heated up. Escape sales dropped 12 per cent in September as Ford faced competitive pressure from the Toyota RAV4 and Honda CR-V. Fusion sales plunged 18 per cent and Fiesta was off 40 per cent as car sales continue to languish with low fuel prices pushing buyers into trucks and SUVs.
Felker said Ford is trying to match production with demand. Inventories have been swelling on the models the automaker is idling. The company had 93 days supply of F-series pickups, which includes the F-150, at the end of September, up from 83 days a year earlier, according to researcher Autodata.
Escape inventory grew to 64 days, from 50 a year earlier, while Lincoln MKC climbed to 96 days from 91 last year, according to Autodata. A 60-day supply is considered optimal.
Ford had 72 days supply of Fusion sedans at the end of last month, up from 51 a year earlier, and it had enough inventory of the Fiesta to last 77 days, up from 56 in September of 2015, according to Autodata.