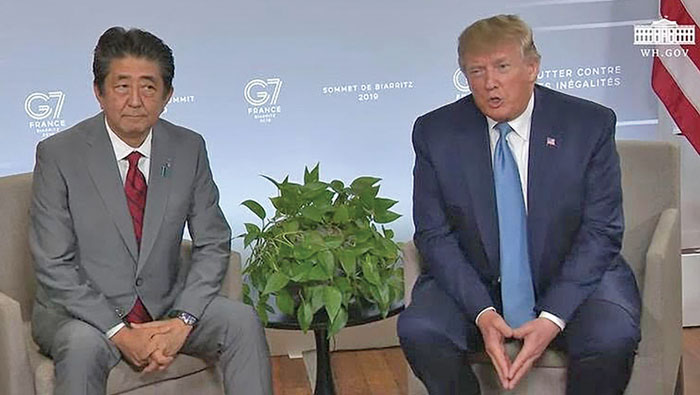 Tokyo: Japanese Prime Minister Shinzo Abe may have averted giving away too much in trade talks with United States President Donald Trump but Tokyo is struggling in advance of a late-month deadline to achieve its primary goal: get the unpredictable president to drop threats of punitive car tariffs.
Even after announcing a preliminary deal with Abe on 25 August, Trump left open the possibility of slapping higher duties on Japanese vehicles, a mainstay of the world’s third-biggest economy and by far Japan’s biggest export to the US.
Trump and Abe are seeking a final agreement in time for their expected meeting on the sidelines of the United Nations General Assembly later in September.
But negotiators have only just begun working out details, such as how much tariffs will be cut for which items, Japanese government officials familiar with the negotiations told reporters.
A deal this month could be tricky, as there’s little time to nail down the wording for politically sensitive areas such as farm products and cars, and clear any legal hurdles, the officials say.
“There’s really no deal between the two countries yet,” one official said. “Negotiations have only just begun.”
Trump and Abe announced their agreement on the core principles of the deal, with Tokyo promising to cut tariffs on US agricultural products and Washington doing likewise on select industrial goods from Japan.
Japan managed to keep tariff cuts on US beef imports within levels granted to signatories of the multilateral Trans-Pacific Partnership (TPP) deal - meeting a pledge Abe had made to domestic producers. Tokyo also skirted pressure, at least for now, to agree to avoid currency “devaluations” - a demand of US legislators that would have tied Japan’s ability to intervene in currency markets should the yen spike and threaten the country’s export-reliant economy.
And it only took a commitment from Abe to front-load already planned purchases of US corn imports to allow Trump to claim victory in announcing the preliminary deal. “It’s a very big transaction,” Trump said, alongside Abe on the sidelines of a summit in France of the G7 leading industrialised nations. “It’s billions and billions of dollars. Tremendous for the farmers.”
Japanese officials say the country’s total feed corn imports won’t increase as a result of the deal, which simply front-loads three months’ worth of roughly 2.75 million tonnes of imports.
As private companies have the final say in how much feed corn they import, the government will only facilitate purchases by subsidising storage fees, they say.
Japan imports roughly 11 million tonnes of feed corn a year, of which 95 per cent come from the US, data by the Finance Ministry shows. That is worth about 254 billion yen ($2.4bn), suggesting three months of front-loading would have a negligible effect on Japan’s 6.5 trillion yen ($60.4bn) trade surplus with the US.
“It’s not fake, but it’s not a fundamental solution” to address the huge US trade deficit with Japan, said one of the officials familiar with the negotiations. “The whole point is to make Trump happy.”
Some Japanese officials said they were uncertain whether such sweeteners would have a lasting effect on Trump, who has made it a priority to fix the huge US trade deficit with other countries.