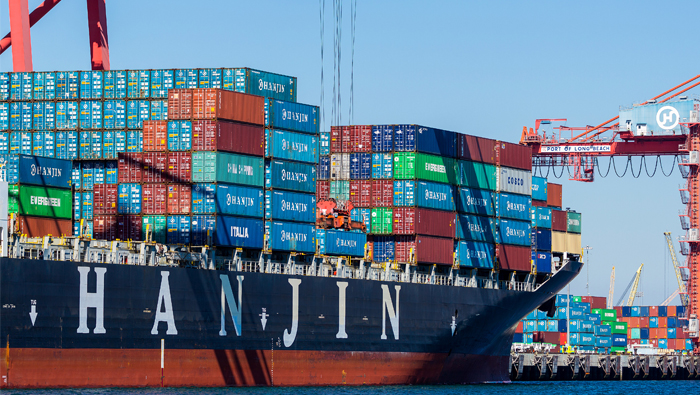 Seoul: Hanjin Shipping, the South Korean container line that sought bankruptcy protection last month, is cutting its fleet by returning some chartered vessels to their owners as it struggles for survival.
The troubled company already returned four box movers and three bulk carriers to their owners, and plans to remove 13 more container carriers, Hanjin said in an e-mail on Monday. In addition, one ship owner has messaged the company saying it plans to take back a container ship from the Seoul-based liner, which had 141 vessels, including 97 container ships as of September 11.
A court in Seoul is hearing Hanjin Shipping’s application for receivership and will decide whether the distressed company could be revived or it needs to be liquidated. The collapse of the firm will probably spark fresh consolidation among container lines as they attempt to ride out shock waves faced by the industry, Germany’s No. 1 carrier Hapag-Lloyd said last week.
In a setback to revival efforts, the board of Korean Air Lines, the biggest shareholder of Hanjin Shipping, failed to reach a resolution when it met Sunday to discuss ways to expedite the injection of 60 billion won ($54 million) it had pledged earlier. The board of the airline will meet again, though the date is undecided, a Korean Air spokesman said.
In turmoil
The bankruptcy filing by the Korean company, which controlled 2.9 per cent share of the global container ship traffic, threw supply chains in turmoil during peak season when retailers look to store warehouses and shelves to prepare for the year’s biggest holiday sales — Thanksgiving and Christmas.
About 30 percent of its container ships have completed unloading, according to Hanjin’s website, while 34 are still stranded at sea and 35 will return to South Korea.
The ‘Wall Street Journal’ reported over the weekend that Hanjin Shipping is working on a plan that requires more than halving its fleet, and the most likely scenario is that it will be liquidated. The nation’s Financial Services Commission had on September 1 said the possibility of liquidation can’t be ruled out. A representative for Hanjin Shipping declined to comment.
Shares of the company dropped as much 9.7 per cent before paring almost all the losses and traded at 1,275 won in Seoul. The stock has slid 65 per cent this year, compared with a 2.5 per cent gain in the benchmark Kospi index.