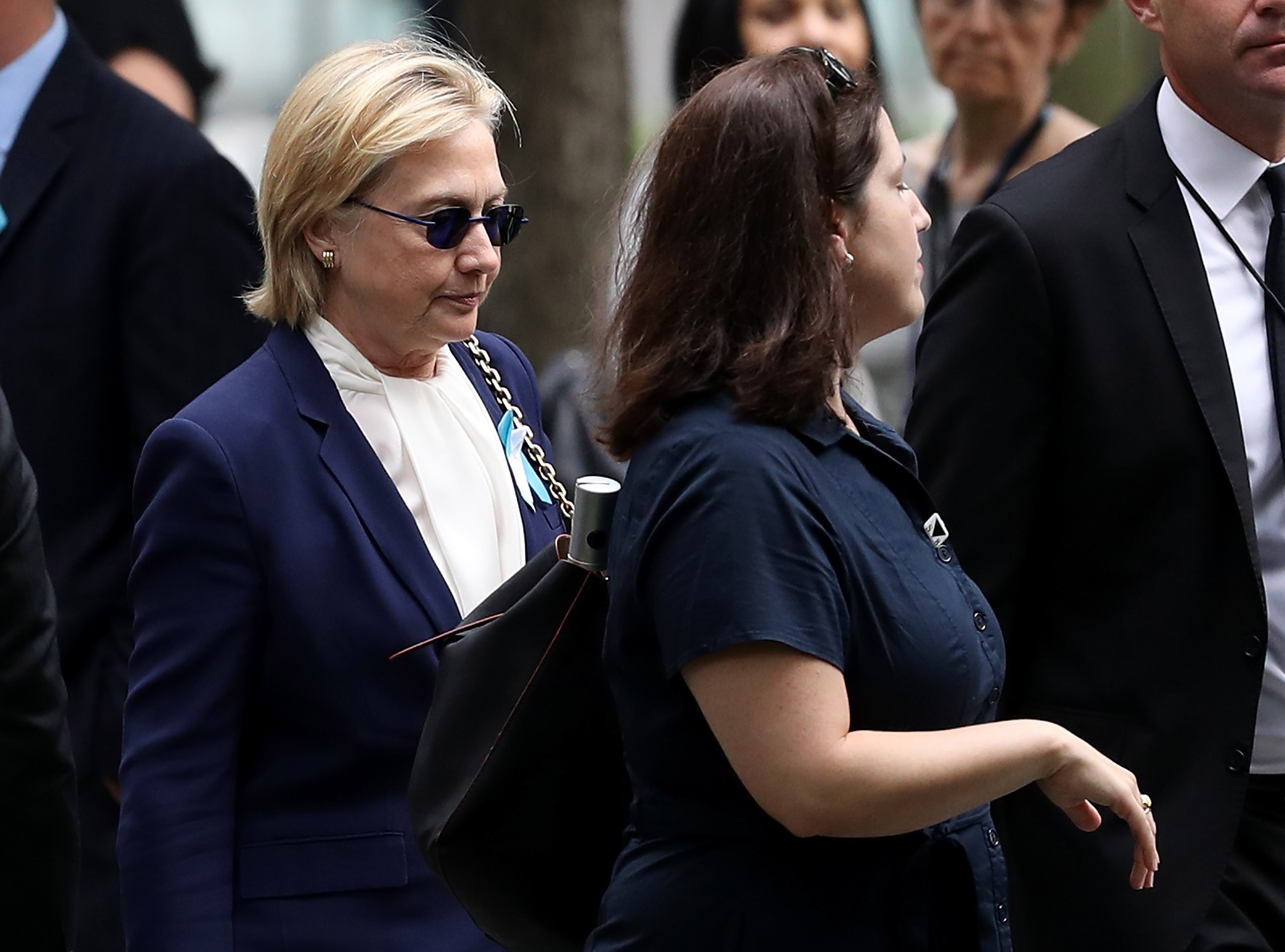 Washington: Democrat Hillary Clinton's bout of pneumonia, kept secret until she nearly collapsed on Sunday, has raised an element of uncertainty about her health going into the final weeks of presidential campaigning and risks feeding a narrative from rival Donald Trump about her stamina.
The Clinton campaign was forced to admit on Sunday that the 68-year-old Democratic presidential nominee had been diagnosed with pneumonia on Friday after she complained of allergies and was seen coughing repeatedly in recent days.
The pneumonia disclosure was made public hours after her campaign said she had become "overheated" to explain why, knees buckling and unsteady, she was rushed from a ceremony marking the Sept. 11, 2001, attacks in New York. Democratic donor and fundraiser Bill Bartmann later fielded calls from about half a dozen Democrats worried about how the episode would look. The callers, he said, decided to wait and see how everything plays out.
For Democrats, the incident also brought up some familiar concerns about Clinton's penchant for secrecy during an ongoing debate about her use of a private email server while serving as President Barack Obama's secretary of state from 2009 to 2013. "You've got Donald Trump promoting health conspiracy theories to begin with, so any time something even lends an air of credence to that conspiracy, it needs to be debunked right away," Democratic strategist Bud Jackson said.
The issue also put pressure on both Clinton and Trump, the Republican presidential nominee, to reassure American voters about their health given the rigors of the presidential campaign, in which the food is often unhealthy, sleep is elusive and the packed schedule and extensive travel is stressful.
"The short term turbulence will be more about the handling of this than the substance, though I'm sure both candidates will be pressed for greater disclosure of health records," said David Axelrod, a former adviser to President Barack Obama. Late on Sunday, her campaign canceled Clinton's trip to California scheduled for Monday morning. The health problem was the latest blow for Clinton at a time when Trump has erased most of her lead in national opinion polls and is competitive again in many battleground states where the Nov. 8 election is likely to be decided. Her dismissal of half of Trump's supporters as a "basket of deplorables" of racist, homophobic people on Friday triggered a firestorm of criticism and prompted her to roll back the comment. During the Republican primary campaign Trump dispatched rival Jeb Bush by deriding him as a "low energy" candidate. His efforts to raise questions about Clinton's stamina mirror that strategy. '
Trump aides did not immediately respond to questions about whether Trump would seek to use the Clinton health incident to his advantage. Trump, normally voluble on Twitter, stayed silent on the issue on Sunday. "I expect they will milk it like crazy," Republican strategist Art Hackney said of the Trump campaign.
"He certainly has already indicated that she doesn't have the stamina, so I think it will be used, absolutely." Trump is expected to discuss his own health regimen in an interview to air on Thursday with celebrity physician Dr. Mehmet Oz.
Trump, a 70-year-old New York businessman, has made no secret of his affinity for fast food, sometimes sharing photos of himself on his campaign jet or at Trump Tower enjoying fried chicken, hamburgers and a taco bowl. He has made less information available about his health than Clinton has. Last December, he released a statement from his doctor, Harold Bornstein, that described him in excellent health with "extraordinary" strength and stamina.
The statement did not mention what medicine Trump might be on or other details typically included in such disclosures and was dramatically different from the hundreds of pages of medical records released by Republican nominee John McCain in 2008 to reassure Americans about his bouts of skin cancer. "If elected, Mr. Trump, I can state unequivocally, will be the healthiest individual ever elected to the presidency," Bornstein wrote.
The Manhattan physician said in August he wrote the letter in five minutes as a Trump limo waited to pick it up. Clinton released a two-page letter outlining her medical condition in July 2015 that sought to reassure Americans about her health after she fell and suffered a concussion at home in 2012 near the end of her tenure at the State Department. Dr. Amesh Adalja, an infectious disease expert and senior associate at the UPMC Center for Health Security in Pittsburgh who is not treating Clinton, said recovery from pneumonia can vary from about a week to longer, depending on the severity.
"Some patients have very little difficulties with activities of daily living and are only mildly hampered by it while others may require hospitalization and have to reduce their activities," he said, adding that pneumonia was the 8th leading cause of death in the United States. Clinton's campaign is likely to be pressed on why she did not make her pneumonia diagnosis public until late Sunday afternoon despite receiving it two days earlier.
"I think it's exceedingly important that Hillary Clinton be transparent about what's going on," said presidential historian Douglas Brinkley. "If she gets a report of pneumonia on Friday, they should try to tell the public in real time. The danger for a candidate is if they seem to be hiding their health history."