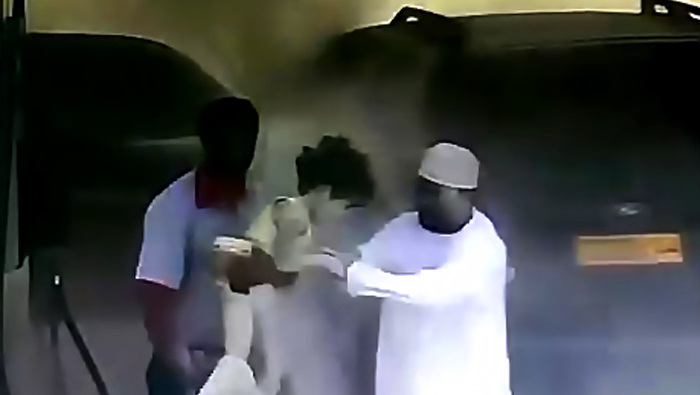 Muscat: A plastic bottle used to store extra fuel was inside the family vehicle that caught fire at a petrol station, leaving two children with horrific burn injuries.
The news has prompted a safety warning from the Sultanate’s emergency services agency to stop transporting fuel in plastic bottles and to keep flammable liquids out of vehicles.
Get your essential daily briefing delivered direct to your email inbox with our e-newsletter
The father of the children, Mohammed Sulaiman, told Times of Oman he had left an old plastic detergent bottle in the back seat of his family car to top up fuel on long trips or in case of an emergency. Fire safety specialists have also spoken of the dangers of transporting flammable liquids in cheap, plastic bottles.
Mohammed’s four-year-old daughter Gazal sustained 75 per cent burns after she and her brother Sulaiman were pulled from the burning family car at a petrol station in Sur two weeks ago.
Rescuer Mohammed Al Hashmi raced to the smoke-filled vehicle and single-handedly rescued both children after their father, who had left them to buy groceries, raised the alarm.
Sulaiman, 3, is recovering but big sister Gazal is still critically ill, according to their father.
Mohammed, still trying to come to terms with the tragic events, has taken time to advise everyone to avoid keeping such items in vehicles to avoid going through what he has been through in the last two weeks.
“It’s not about flammable items only but anything which might start a fire inside vehicles. People should even avoid smoking inside their vehicles. I still don’t know the reason behind the fire which led my children to suffer critical condition. However, people should avoid keeping anything inside their vehicles which might catch a fire,” said Mohammed.
Although it might be not the reason for the fire, the father said he kept a three litre plastic bottle in the car filled with fuel before using it to top up his vehicle when it ran out of fuel.
“Yes I kept a bottle but it was small and empty. I just filled it in the past because my vehicle was running out of fuel and I used it. Now I ask everyone to keep out items which might cause fire inside vehicles,” said the father.
CCTV footage of the incident clearly shows an ignition inside the cabin of the family car, but PACDA has yet to finalise its report into the tragedy.
A PACDA spokesman called on the public to avoid keeping flammable items inside their vehicles. “Don’t leave your children alone in the car. Don’t keep flammable objects in the car and get rid of them immediately,” the PACDA spokesman advised the public.
Keeping bottles or cans of fuel in the vehicle without taking precautions might result in a fire, PACDA advised.
The PACDA clarified that although there is no law in place against carrying fuel in a car, there are special items which can be used for such purposes and motorists should remove them from the vehicle after using them.
Anthony Cole, Technical Director of Aman Fire Protection Consultants said, “Never keep a bottle of fuel in the car and always keep fuel in an approved flammable liquid container.”
He adds that even when the container looks empty, a few millilitres of fuel could cause a large fire. “Always keep the bottle in the trunk or outside of the car,” Anthony Cole advised, adding that motorists should always pump fuel in an approved flammable liquid container because it has a vent that relieves the pressure inside the container.
“If fuel is kept inside a plastic bottle then it would eat it up and leak out,” said Anthony Cole.
Talking about his children’s progress in hospital, Mohammed added: “The boy is getting better. I was with him and talked to him, but he isn’t talking much. He has a hard time opening his eyes, but he can sense who is around him.”
He added that the girl’s situation is still critical. “She needs cosmetic surgeries but the problem is her respiratory organs (lungs) are burned inside due to breathing in the hot smoke. “The doctors are giving her medication to keep her where she is and avoid her condition going lower, but her body is yet to get better,” said the father.