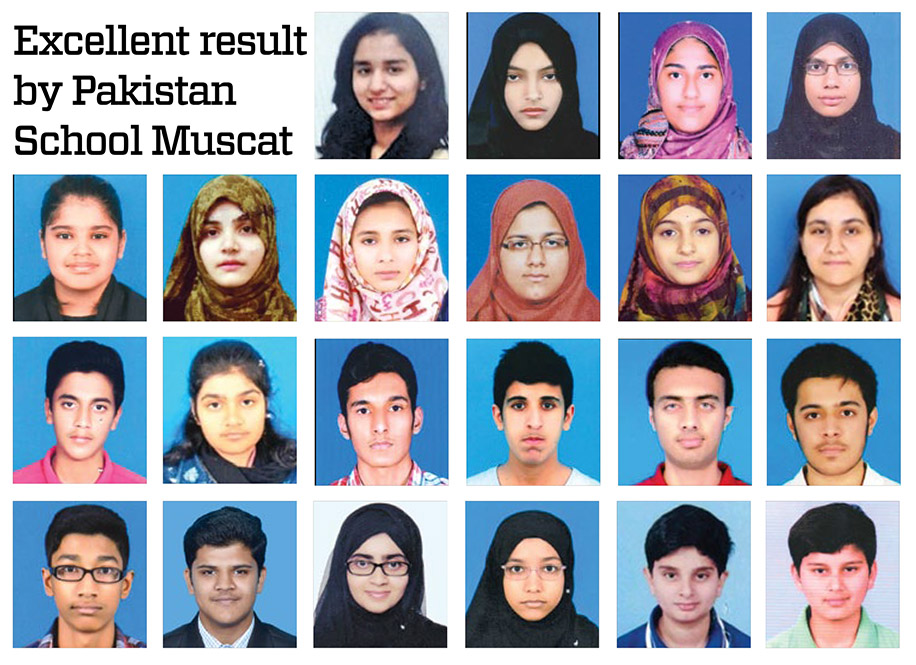 Muscat: Students of Pakistan School Muscat have excelled in 2016 in academics, producing outstanding results in various international board examinations.
In the IGCSE examination, a remarkable milestone has been achieved for the first time in the history of Pakistan School Muscat, with the first position in A2 being shared by Nimra Munir and Saad Aftab, who secured a straight A* in all the subjects. The second position was bagged by Aimen Javed with two A* and one A.
Chaudhry Taimoor Niaz and Fatima Ayaz shared the third position with two As and two Bs, respectively. While in AS, Aleena Majid and Manan Rauf shared the first position , Muhammad Sohaibul Haq and Sarwa Jalees shared the second position by securing straight As, while Sarah Javed stood third, scoring two As and one B.
Likewise in the FBISE-SSC-II examination, the results have been exceptional. In Class X, Asma Ali, Fatima Asif and Rabia Ahmed stood first, second and third, respectively, while in class IX, Saima Siddique secured the first position, followed by Rida Rafique and Hania Shezad obtaining the second and third positions, respectively. In class XII, the first, second and third positions were secured by Quswa Mujeed, Rao Farhan Suhail and M. Salman Yunis, respectively while in class XI, Nimra Saleemh bagged the first position. The second and third positions were shared by Warda Sajjad and Aaina Pasha, and Saba Shehzad and Saleha Rahim, respectively.
**media[484013]**
These are well-deserved successes and excellent achievements that are an enlightening display of the hard work of students, the arrant support and profound devotion of the parents towards their children, and above all the untiring efforts and dedication of the esteemed teachers, who put in their best in order to achieve such an applause-worthy and commendable result.