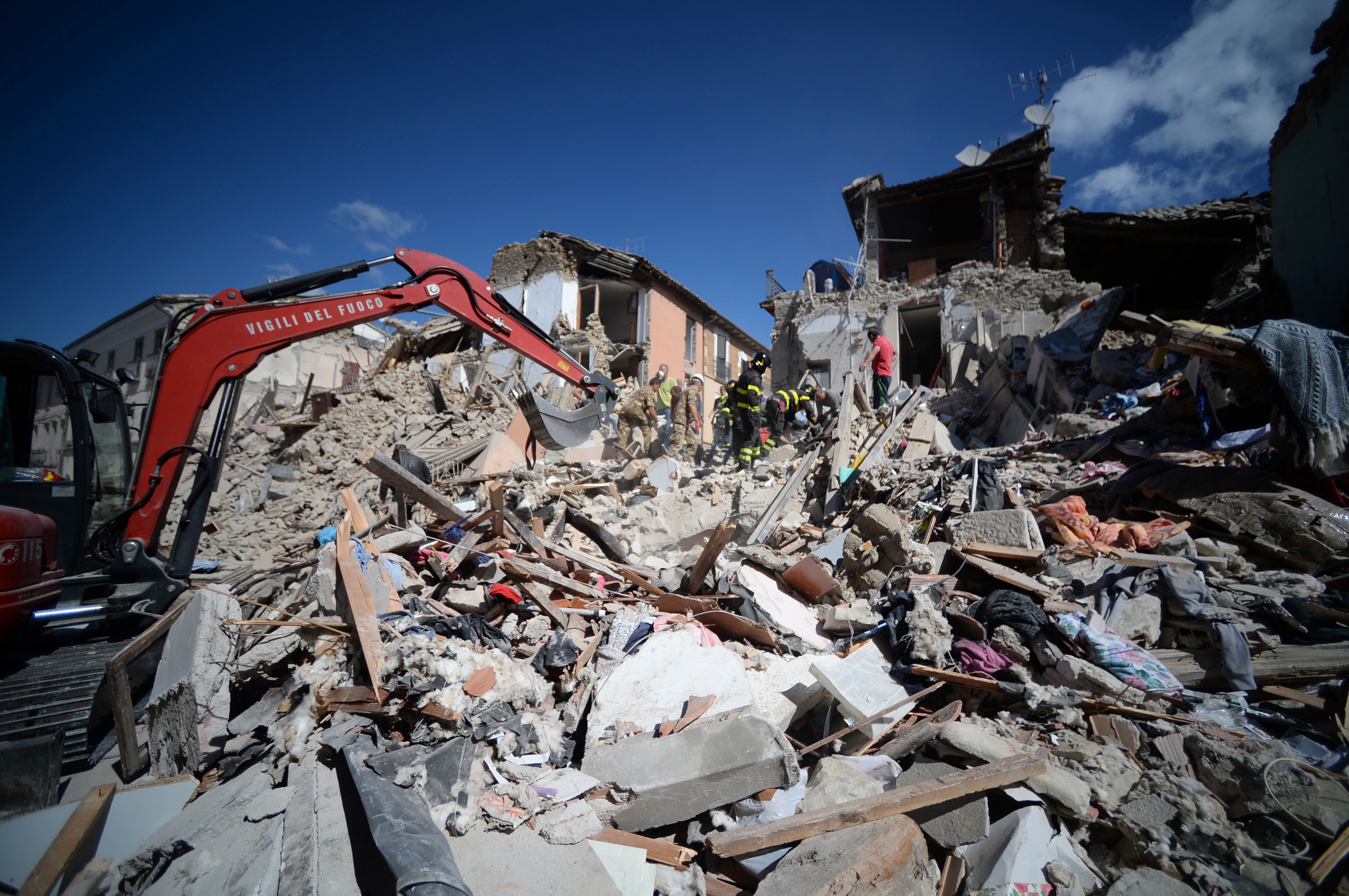 Accumoli (Italy): The death toll from a devastating earthquake in central Italy rose sharply to almost 250 people early on Thursday after rescue teams worked through the night to try to find survivors under the rubble of flattened towns.
The provisional toll jumped to 247 from the 159 dead listed on Wednesday night, national and regional officials said as a wave of aftershocks rattled a cluster of mountain communities 140 km (85 miles) east of Rome.
The strong 6.2 magnitude quake struck early on Wednesday as people slept, razing homes and buckling roads. It was powerful enough to be felt in Bologna to the north and Naples to the south, both more than 220 km (135 miles) from the epicentre.
The sun rose on Thursday on many people who had slept in cars or tents, the earth continuing to tremble under their feet. Two powerful aftershocks registered 5.1 and 5.4.
Officials said the death toll seemed destined to rise further. The toll appeared likely to surpass that from the last major quake to strike Italy, a temblor that killed more than 300 people in the central city of L'Aquila in 2009.
At least 368 injured people had been taken to hospital by late on Wednesday, Prime Minister Matteo Renzi said.
One hotel that collapsed in the small town of Amatrice probably had about 70 guests and only seven bodies had been recovered so far, said the mayor of the one of the worst-hit towns.
Rescuers working with emergency lighting in the darkness saved a 10-year-old girl, pulling her alive from the rubble where she had lain for some 17 hours in the hamlet of Pescara del Tronto.
Many other children were not so lucky. A family of four, including two boys aged 8 months and 9 years, were buried when their house imploded in the nearby village of Accumoli.
As rescue workers carried away the body of the infant, carefully covered by a small blanket, the children's grandmother blamed God. "He took them all at once," she wailed.
Renzi said the Cabinet would meet on Thursday to decide measures to help the affected communities.
"Today is a day for tears, tomorrow we can talk of reconstruction," he told reporters late on Wednesday.
MANY VICTIMS VISITORS
Aerial photographs showed whole areas of Amatrice, last year voted one of Italy's most beautiful historic towns, flattened by the quake. Inhabitants of the four worst-hit small towns rise by as much as tenfold in the summer, and many of those killed or missing were visitors.
The civil protection agency said it was trying to determine how many people were staying in the Hotel Roma, Amatrice's best-known accommodation that mayor Sergio Pirozzi said had collapsed.
Most of the damage was in the Lazio and Marche regions, with Lazio bearing the brunt of the damage and the biggest toll. Neighbouring Umbria was also affected. All three regions are dotted with centuries-old buildings susceptible to earthquakes.
Italy's earthquake institute, INGV, said the epicentre was near Accumoli and Amatrice, which lie between the larger towns of Ascoli Piceno to the northeast and Rieti to the southwest.
The quake was relatively shallow at 4 km (2.5 miles) below the earth's surface. INGV reported 150 aftershocks in the 12 hours following the initial quake, the strongest measuring 5.5.
Italy sits on two fault lines, making it one of the most seismically active countries in Europe.
The most deadly temblor since the start of the 20th century came in 1908, when an earthquake followed by a tsunami killed an estimated 80,000 people in the southern regions of Reggio Calabria and Sicily.