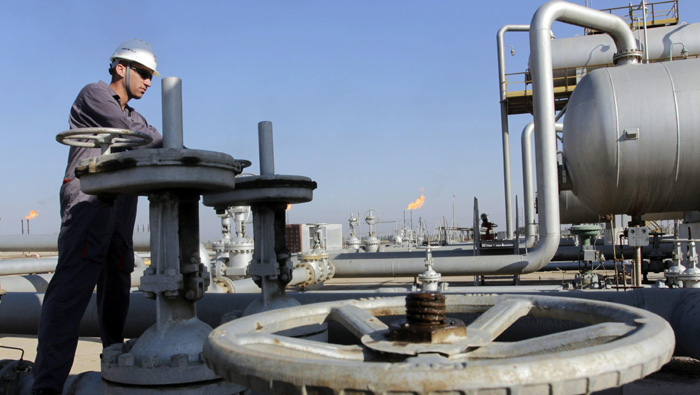 London: Organisation of Petroleum Exporting Countries (Opec) and some producers from outside the group may agree to freeze output during informal talks next month, which could prove ‘self-defeating’ because it would benefit other suppliers, according to Goldman Sachs.
A deal would show signs of cooperation from Saudi Arabia’s new energy minister after six failed attempts, Goldman analysts including Damien Courvalin said in a report dated August 22. An output cap would likely prove counterproductive for the Opec if it led to further price gains and an increase in supply from other producers, it said.
“Thawing relationships between parties in conflict in areas of disrupted production would be more relevant to the oil rebalancing than an Opec freeze, which would leave production at record highs,” Goldman said. “A production freeze would also likely prove self-defeating if it succeeded in supporting oil prices further, with the United States oil rig count up 28 per cent since May.”
Oil climbed more than 20 per cent to enter a bull market on Thursday amid speculation talks in September may lead to action to stabilise the market. Opec is on course to agree to a freeze because its biggest members are pumping flat-out, according to Chakib Khelil, former president of the group. A similar plan was proposed in February, but a meeting in April ended with no accord.
Saudi Arabia and Iran continue to focus on market share and appear unlikely to unilaterally accept a freeze, Goldman said. Supply will remain the driver for oil prices in coming weeks, with no evidence demand growth is weakening, the bank said. Uncertainty about the sustainability of supply gains from Iraq, Libya and Nigeria and the magnitude of these improvements ‘remain large’.
Goldman maintained its $45 a barrel to $50 a barrel forecast through next summer and reiterated that the price and fundamental recovery remain fragile.
West Texas Intermediate extended losses for a second day on Tuesday, falling as much as 1.7 per cent to $46.62 a barrel on the New York Mercantile Exchange, while Brent crude slid as much as 65 cents to $48.51. WTI capped a 16 per cent advance over seven sessions on Friday.
Oil extends loss
Oil extended its biggest loss in three weeks before the release of United States. crude inventory data on Wednesday, while Goldman Sachs. cautioned that any Opec deal to freeze output may only deepen the global oversupply.
Oil entered a bull market last Thursday, having climbed more than 20 per cent since dipping below $40 a barrel earlier in the month. Crude was driven higher partly by speculation that discussions among members of the Opec may lead to action to stabilize the market. Prices subsequently retreated as Iraq sought to increase exports and Nigerian militants called an end to hostilities, potentially boosting supply.
"We’re expecting the availability of crude supply to improve, causing a counter-seasonal build in inventories in the second half,” said Giovanni Staunovo, an analyst at UBS Group in Zurich. "This will favor lower prices in the short run.”
US supplies
West Texas Intermediate for October delivery lost as much as 79 cents to $46.62 a barrel on the New York Mercantile Exchange and was at $46.81 in London. The September contract expired on Monday after dropping $1.47 to close at $47.05, the biggest decline since August 1. Total volume traded Tuesday was about 36 per cent above the 100-day average.
Brent for October settlement lost as much as 66 cents, or 1.3 per cent, to $48.50 a barrel on the London-based ICE Futures Europe exchange, having slipped 3.4 per cent on Monday. The global benchmark crude traded at a $1.78 premium to WTI.
US gasoline stockpiles probably shrank by 1.5 million barrels for a fourth week of declines, according to the median estimate in a survey before the Energy Information Administration report. Crude and motor-fuel inventories are still at their highest seasonal level in at least two decades.
In Nigeria, the cease-fire declared by the Niger Delta Avengers should be viewed with caution, according to Commerzbank and Global Risk Management. The Avengers have previously distanced themselves from talks with the government.
China’s oil demand may be cut by 250,000 barrels a day in the third quarter as the country limits pollution from factories before a Group of 20 summit in early September, according to consulting firm Energy Aspects.