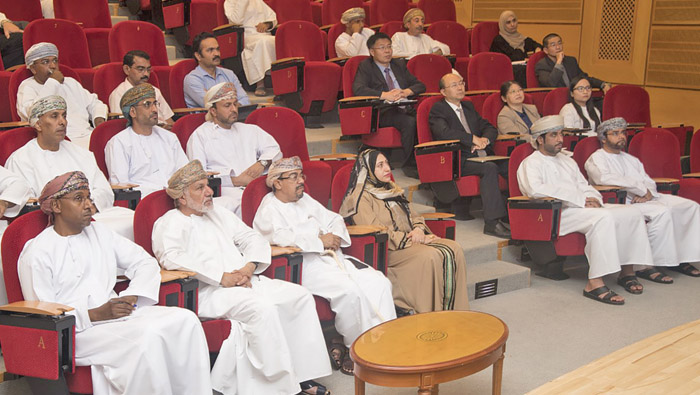 Muscat: The International Forum on Remote Sensing Applications in the Physical Oceans, organised by Sultan Qaboos University, was held yesterday under the patronage of Dr. Ali bin Saud Al Bimani, Vice-Chancellor of Sultan Qaboos University (SQU).
The forum is organised by the Remote Sensing Research and GIS Centre at the University in cooperation with the Chinese Central Oceanographic Satellite Laboratory of the Chinese Oceanographic Institute and the Marine Science Centre of the Ministry of Agriculture and Fisheries.
This forum seeks to highlight this technology and its applications in keeping with the progress of science.
Eight working papers were presented to speakers from the Marine Science Department at the University, the Marine Science Centre of the Ministry of Agriculture and Fisheries and six other papers from the Chinese Institute.
The forum was attended by a number of government agencies, the Oman National Hydrographic Office of the Royal Navy of Oman (RNO) and NGOs.
It is worth mentioning that the fields of research cooperation between the Remote Sensing Research Centre at Sultan Qaboos University (SQU) and the Chinese laboratory have been opened, as well as with many of the participants in this forum.
Dr. Yaseen Al Mulla, Director of Remote Sensing and Geographic Information Systems Research Centre, in which he gave a brief about the RSGIS research centre at the University and its objectives and capabilities, the research and projects that have been implemented and those that are ongoing utilising aerial and satellite imagery.
Dr. Yaseen noted that it is fortunate to establish this forum with the Chinese institute and laboratory at this time where the Sultanate of Oman and the Republic of China are celebrating the 40th anniversary of the relations between the two countries.
Dr. Feng Zhou, Deputy Director of Chinese State Key Laboratory of Satellite Ocean Environment Dynamics presented a keynote speech and explained three case studies on the applications of remote sensing in this field including monitoring of Hypoxia.
The aim of the forum, which was attended by a number of government and non-government organisations in addition to Oman National Hydrographic Office from Royal Navy, was to shed light on this hi-tech and its applications to cope up with the development of science.