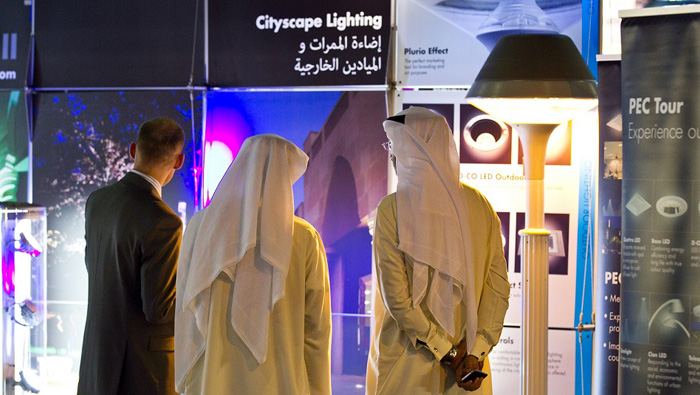 Muscat: Increased demand for energy-efficient lighting solutions in the Gulf Cooperation Council (GCC) is spurring fresh growth for the LED market, as the sustainable and long-lasting luminaire looks to dominate the regional architectural and public lighting landscape.
Analysts Frost & Sullivan estimate that the GCC’s LED (light-emitting diode) market was worth $900 million in 2015, comprising 38 per cent of the region’s total $2.4 billion lighting fixtures market for the year.
As regional governments implement eco-friendly green building regulations along with public and street light retrofitting programmes, demand for LED technology is expected to grow by 16-17 per cent annually over the next five years.
According to Frost & Sullivan, more than 60 per cent of all inquiries for lighting in the region are now for LED systems, indicating that smart and sustainable solutions are the way forward in place of traditional incandescent and fluorescent bulbs.
Smart and intelligent lighting solutions will also be the key theme running throughout Light Middle East 2016, the region’s largest trade show dedicated to lighting design and technology.
The 11th edition of the three-day event will take place from October 31 to November 2 at the Dubai International Convention and Exhibition Centre, and is expected to feature more than 425 exhibitors from 30 countries, all of which will eagerly showcase their latest wares to a market which is facing a paradigm shift in new technology adoption.
“As the Middle East continues to switch to sustainable lighting solutions, the dynamics of the regional market is transforming rapidly,” said Ahmed Pauwels, chief executive officer of Messe Frankfurt Middle East, the organiser of Light Middle East.
“The Gulf region’s lighting fixtures market alone will be worth US$3.5 billion by 2020, and with new trends such as connected lighting and LED’s convergence with information technology, we can expect to see some exciting new innovations at Light Middle East 2016. This year’s edition will shine the spotlight on smart lighting concepts, aligning with Dubai’s vision to be the smartest city in the world.”
The Smart Dubai mission, to embrace technology innovation – of which lighting is an integral component – is fully supported by the Emirate’s Roads and Transport Authority (RTA), one of its key strategic partners.
As part of the Dubai Water Canal project, the RTA recently opened its 800 metres Sheikh Zayed Bridge replete with smart lighting fixtures controlled via a dedicated app that’s supported by a database for tracking the lighting condition.
Meanwhile, the record exhibitor turnout at Light Middle East 2016 will be spearheaded by world-renowned brands such as Targetti, acdc, Linea Light, Osram, Martin, and Reggiani. These and many others will rub shoulders at the show’s Future Zone, offering consultants, designers, contractors, and developers unique insights into the latest technologies that can take their projects to award-winning status.
Huda Lighting, one of the Middle East’s leading lighting solution providers, is returning for the third straight year to Light Middle East 2016 with a brand portfolio of the world’s top lighting manufacturers.
Managing Director Khaled Alami, said the company has big regional growth plans as the lighting landscape continues to evolve: “The major development for Huda Lighting this year is that we’ve expanded our operations into Kuwait and Egypt,” said Alami.
“Kuwait came as a natural expansion because we already cover the rest of the GCC. And Egypt, with its more than 90 million population that is predominantly young and urban, is a market with huge potential.
“Smart lighting will be a game changer in the next few years, where lighting is used for purposes other than just illumination,” added Alami. “For example, we’re now able to connect to the internet through LED sources, or Li-Fi.
“There’s a lot of talk about the evolution of smart lighting; there used to be smart systems which controlled lights. Now it’s going to be directly through the source, communicating with the light rather than having to go through an interface. From 2016-2020, this is going to evolve in a very strong way, globally, and in the Middle East.”
Another returning exhibitor in 2016 is QLT Group from Italy with its companies Qualitron and Qualiko – among Europe’s leading producers of lighting electronics and LED fixtures. Gilberto Cantoni, Export Manager for the Middle East at Qualitron/Qualiko, reported a “massive increase of action” in the regional lighting market in the last 12 months.
“We have seen a huge increase of sales in the Middle East for our top quality LED strips with high CRI (color rendering index) >94,” said Cantoni. “We expect to double our sales revenue in the region over the next 18 months, and our main aim at Light Middle East 2016 is to consolidate the contacts in the region from previous editions.”
Other headline exhibitors at Light Middle East 2016 with smart lighting solutions at the core of their product portfolios include Cinmar Lighting Systems, Ruud Lighting Arabia, and Swiss LED.
The annual showpiece event returns with its headline popular features including the Light Middle East Conference, bringing together key leaders to analyse innovative technologies, changing global trends and evolving regulations impacting the lighting industry. The prestigious 4th Light Middle East Awards on October 31 will also celebrate the most outstanding lighting projects and designers from throughout the region.