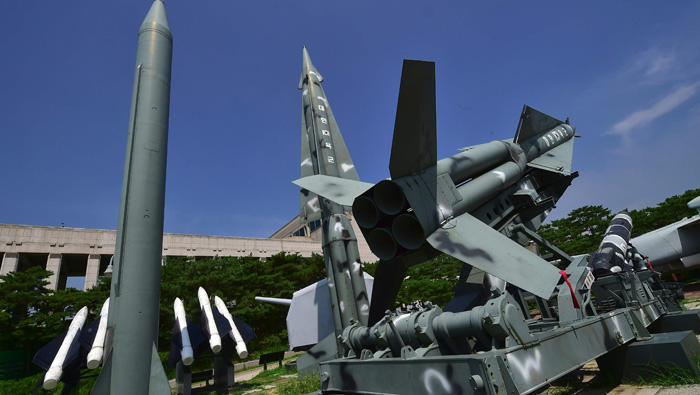 Seoul: North Korea fired three ballistic missiles on Tuesday which flew between 500 and 600km (300-360 miles) into the sea off its east coast, South Korea's military said, the latest in a series of provocative moves by the isolated country.
The United States military said it detected launches of what it believed were two Scud missiles and one Rodong, a home-grown missile based on Soviet-era Scud technology.
North Korea has fired both types numerous times in recent years, an indication that unlike recent launches that were seen as efforts by the North to improve its missile capability, Tuesday's were meant as a show of force.
"This smells political rather than technical to me," said Melissa Hanham, a senior research associate at the US-based Middlebury Institute of International Studies at Monterey, California. "I think the number and distance of the missiles lets them remind the ROK (Republic of Korea) of what they are up against," she said, referring to South Korea by its official name.
North Korea and the rich, democratic South are technically still at war because their 1950-53 conflict ended in an armistice, not a peace treaty. The North regularly threatens to destroy the Japan, South Korea and the South's main ally, the United States.
The launches came nearly a week after South Korea and the United States chose a site in the South to deploy the Terminal High Altitude Area Defence (THAAD) anti-missile system to counter threats from the North, which had prompted Pyongyang to threaten a "physical response".
"Our assessment is that it was done as a show of force," a South Korean Joint Chiefs of Staff official said at a briefing.
The missiles were launched from an area in the North's western region called Hwangju between 5:45am South Korea time (2045 GMT Monday) and 6:40am, the South's military said, an indication that the North was confident they would not crash on its own territory.
"The ballistic missiles' flight went from 500km to 600km, which is a distance far enough to strike all of South Korea, including Busan," the South's military said in a statement. Busan is a South Korean port city in the south.
North Korea has test-fired a series of ballistic missiles in recent months, in defiance of UN Security Council resolutions, including intermediate-range missiles in June and a submarine-launched missile this month.
"In addition to the basic goal of enhancing missile units' readiness to fight, it might be a way of reminding their southern neighbours that the site chosen for a THAAD battery in South Korea is within reach," Joshua Pollack, editor of the U.S.-based Nonproliferation Review, said of Tuesday's launches.
South Korea announced last week the THAAD system would be deployed in the southeastern county of Seongju. In addition to the decision to base a THAAD system in South Korea, the United States recently angered North Korea by blacklisting its leader Kim Jong Un for human rights abuses.
"The threat to our national security is growing very quickly in a short period of time," South Korean Prime Minister Hwang Kyo-ahn told parliament on Tuesday.
Bombs, missiles
North Korea conducted its fourth test of a nuclear device in January, and activity at its nuclear test site has increased recently, according to media reports in South Korea and Japan citing government officials, as well as a report by Washington-based North Korea monitoring project 38 North.
Following the latest nuclear test and a February space rocket launch that was widely viewed as a missile test in disguise, the UN Security Council imposed tough new resolutions that further isolate North Korea.
While China supported tougher sanctions against its neighbour and ally North Korea, it has sharply criticized the decision to base a THAAD battery in South Korea, saying the move would destabilise the security balance in the region.
"The situation on the Korean peninsula is severe and complex and all sides should avoid any actions that raise tensions," China's foreign ministry said, echoing previous statements. Japan denounced the launches.
"The latest launch is a breach of the UN Security Council resolution and is extremely hazardous to shipping and aircraft and we have strongly protested," the Japanese government said in a statement.