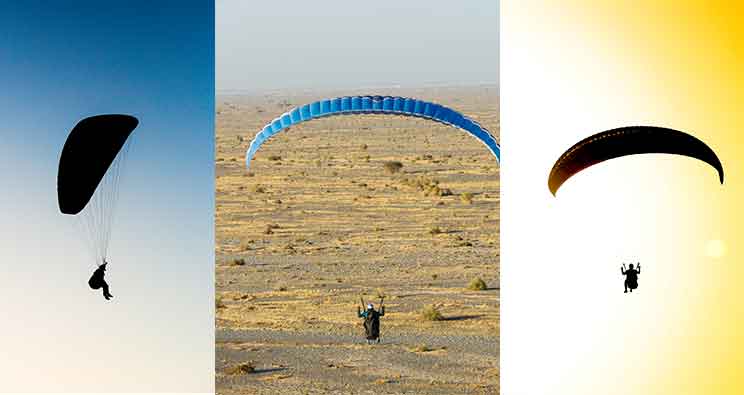 Man’s longing to fly has a history as long as that of mankind itself and though nobody knows exactly who invented paragliding, it seems to have been born of this age-old desire. During the late seventies skydivers in Montana in the United States began practising their sport on the ground, jumping from small hills with their parachutes and floating down. Around the same time, climbers in the French Alps were using skydiving canopies to help them make safe descents down from peaks. By the eighties, the idea of using canopies to sail through the sky had developed into an established sport called paragliding.

Skydiving chutes were modified by switching to non-porous fabric, expanding the wingspan, and adjusting the shape and trim of the airfoil. Each new development resulted in unpredictable changes in the flight characteristics of the gliders, demanding new piloting skills and techniques. Now that the equipment has been standardised, proper instruction is key for safely flying in a glider. A beginner should spend hours learning how to ground-handle and launch a “wing” in different wind conditions.

I met, Thaha, who joined the Falcon Adventures paragliding in his fifties, as he was preparing to attempt flight from the highest peak in the Al Nahda Dunes.

“I got training a few days at Seeb beach and came here to fly several times. Now the instructors say that I am an expert and they will be issuing me a recognised pilot licence. Even though I am going to finish my course with this final flight, this is so addictive that I am planning to buy the equipment online, and continue on my own, trying new locations,” he told me before hopping into the Jeep Cherokee that was ferrying gliders and their equipment to the top of the dune.

I stood next to Syed Hamid Raza, the founder of Falcon Adventures, watching as one by one the colourful gliders descended into the wadi. Syed was giving instructions over a walky-talky to an airborne pilot. “Turn left, right, full break,” he said, as we watched the floating figure make a perfect landing.

Falcon Adventures offers three courses in paragliding: Basic, intermediate, and a pilot licence course, which can be completed all together over ten days.

The basic paragliding course is just an introduction, which teaches ground handling and slope running. Throughout the course each student will learn the basics of proper paraglider setup, inflation, ground handling, and try assisted take-off. During the pilot licence course, the students have to independently control the glider, and upon completion, Falcon will issue an internationally recognised licence from their affiliates, Thailand Air Sports Association and British Flying Association, which allow holders to fly anywhere in the world.

The company also offers paramotoring courses, which are similar to paragliding, but with a propeller strapped to your back. Wearing a motorised propeller like a backpack, thrusts the glider into the sky, giving paramotorists the ability to take off from almost any open area, with no need for a runway.

“We run a ten-day paramotor basic course in which we teach ground theory, introduction to paramotor parts, and ground handling of paraglider without and with motor. On the third day we do solo flights from Al Nadha dunes with paragliders, then next three days we give extensive training of handling a paraglider in air to the student, who then has three flights per day for the next four days. Once we are confident that they can handle the paraglider, we attach paramotor with the paraglider. On the last day the student will take-off and have a solo flight for 15 to 20 minutes,” Syed Hamid explained.

The second course for paramotoring is an advanced, seven-day course during which students learn low level flying, manoeuvring, high flying, cross-country flying, and emergency safety skills. After completing the training, paramotorists can get memberships for OMR15 per month for access to equipment.

For those less excited by the idea of soaring through the sky alone, joyrides with instructors are available at Sawadi Beach and Al Nahda Dunes for OMR15.