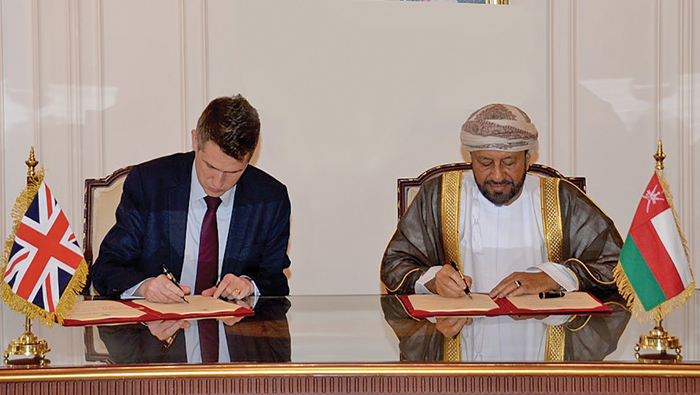 Muscat: An official talk session between Sayyid Badr bin Saud Al Busaidi, Minister Responsible for Defence Affairs, and Gavin Williamson, UK Secretary of State for Defence was held on Wednesday at Bait Al Falaj Camp.
The two sides reviewed cooperation relations in military fields between the two countries and means of enhancing and developing them. They also disused a number of issues of mutual interest.
They also signed a memorandum of understanding between the government of Oman represented by the Ministry of Defence and the Government of the UK regarding loaning a number of Omani military officers from the different Sultan Armed Forces to work at the UK forces as it is the case with the U.K forces to share experiences and skills between the two sides.
The loaning of Omani officers is being done for the first time between the two countries.
The signing of MoU was attended from the Omani side by Mohammed bin Nasser Al Rasbi, Secretary General at the Ministry of Defence, Lt. Gen Ahmed bin Harith Al Nabhani, SAF Chief of Staff, Maj.Gen Mattar bin Salem bin Rashid Al Balushi, Commander of the Royal Army of Oman, while its was attended from the UK side by the UK envoy, and the delegation accompanying the British guest.