Visit by Pakistan Navy ships to boost relations with Oman 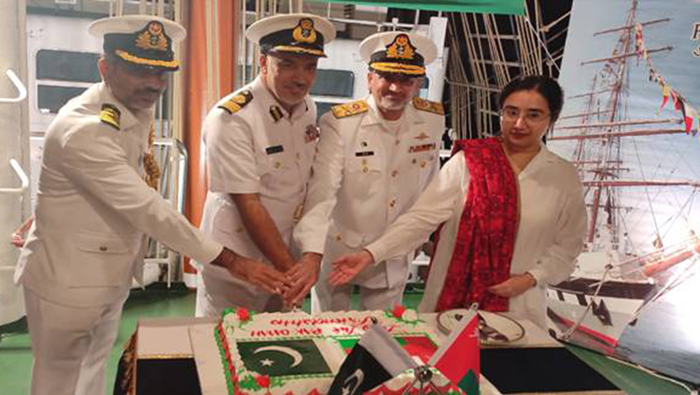 Muscat: A group of Pakistan Navy ships including PNS Rahnaward (Sail Training Ship), PNS Rasadgar and Pakistan Navy Submarine Hashmat visited Muscat from 12 January to 15 January 2023 to celebrate the 3rd anniversary of His Majesty Sultan Haitham bin Tarik's accession to power.
The other objectives of visit were to generate goodwill and enhance mutual ties between the two countries.
The group of Pakistan Navy Ships and Submarine was led by Commodore Muhammad Nasir Iqbal SI (M) as Mission Commander.
During the visit, Mission Commander along with commanding officers of Pakistani ships and submarine called on various officials of the Royal Navy of Oman.
The Pakistani delegation had mutual discussions on bilateral cooperation between the defence forces of both the countries and explored avenues of collaboration between Pakistan Navy and Royal Navy of Oman.
A reception was hosted on-board Pakistan Navy Ship Rahnaward which was attended by local dignitaries, diplomats including Ambassadors and Military Attaches of various countries and officers from Royal Navy of Oman.
Commodore Muhammad bin Hamood Al- Zadjali, Commandant Sultan Qaboos Naval Acedemy Oman graced the occasion as the Chief Guest.
Other activities included visit of Pakistan Naval cadets to Sultan Qaboos Naval Academy and cadets from Sultan Qaboos Naval Academy to Pakistan Navy Ship Rahnaward in order to promote mutual training.
The visit of Pakistan ships and submarine was aimed at strengthening the bonds of friendship between Sultanate of Oman and Pakistan in general and Royal Navy of Oman and Pakistan Navy in particular. The visit will surely contribute towards improving interoperability and learning from each other in maritime operations domain.