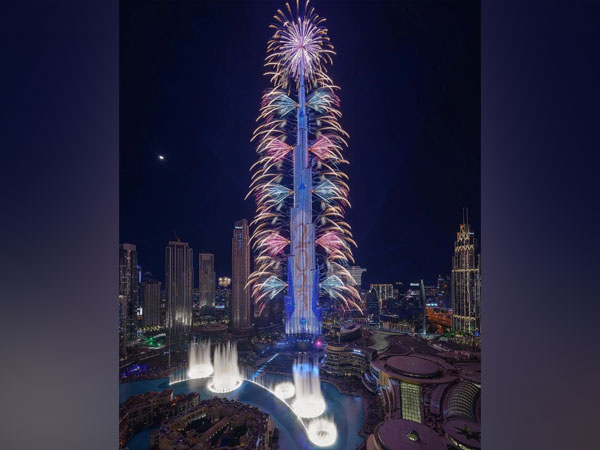 Abu Dhabi: The United Arab Emirates welcomed the year 2023 in style with a spectacular display of record-breaking fireworks at dozens of locations, Gulf News reported.

The UAE set three world records, fireworks in dozens of locations, drone shows, and star-studded concerts with Emirates celebrating it as a spectacular affair, Khaleej Times reported. Revellers rang in 2023 with festivities free of Covid-related restrictions for the first time since the pandemic hit. Parties marked the end of a momentous year for the country, with the UAE Vice-President vowing to make 2023 "even more beautiful", according to Khaleej Times.

As soon as the clock touches 12 am, the entire world indulged in celebrations of the new year.

Thailand and Taiwan began the New Year celebrations with the display of huge fireworks at the skyline and all-night parties with breathtaking views, according to the visuals provided by Reuters.

Thailand's Wat Arun Ratchawararam Ratchawaramahawihan temple was lit up with firecrackers and painted the sky in various colours.

Meanwhile, in Taiwan, fireworks illuminated the sky in Taipei, videos sourced from Reuters showed.
The fireworks were launched from the Taipei 101 building, which is not only the tallest building on the island but also one of the tallest in the world.

Earlier, n Australia, dazzling fireworks lightened up the Sydney Harbour Bridge on New Year's eve as the sky got painted with different colours.

Visuals sourced from Reuters showed Sydney Harbour Bridge in a well-lit state with flashy illuminations all around.

People in Auckland, New Zealand welcomed the New Year 2023 amid fireworks and light shows. As the clock strikes 12, the Auckland Tower lit up and fireworks erupted in the air. The citizens of Auckland stand beneath the tower donning headgear made with fairy lights. There is a light show on the Auckland Harbour Bridge displaying different colours.

Meanwhile, in India, the new year celebrations begin in full swing to welcome the year 2023.
From Delhi to Mumbai and Chennai to Kolkata, the mood on the December 31st night was like a merry-go-round.