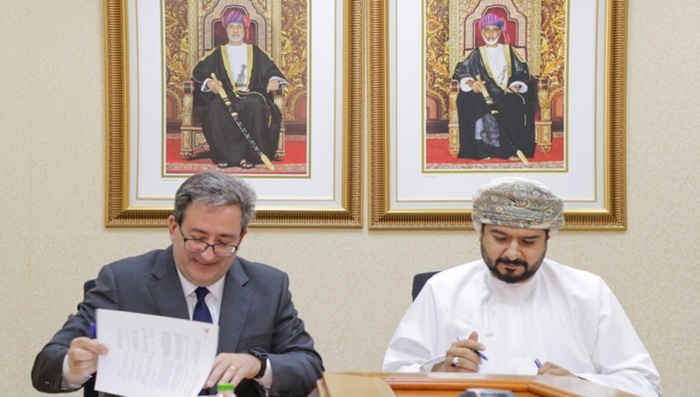 The MoC was signed by Qais Mohammed Al Yousef, Minister of Commerce, Industry and Investment Promotion and Rogerio Nogueira, Regional Director for Marketing in Vale Company.

Muscat: Oman plans to develop a comprehensive industrial complex in the country in line with international priorities of reaching net zero carbon emissions by 2050.

A memorandum of cooperation (MoC) was signed by the Ministry of Commerce, Industry and Investment Promotion with Vale Company to conduct a feasibility study about the industrial complex.

Within the Royal care of His Majesty Sultan Haitham bin Tarik on improvement of environment performance and curbing the impacts of climate change, 2050 has been set as the deadline to reach carbon neutrality.

A national plan has been approved to achieve this goal coupled with the establishment of Oman Sustainability Centre to oversee and implement plans to achieve net zero carbon emissions.

His Majesty the Sultan has also directed cooperation of all units of the administrative apparatus of the state with the departments concerned for the success of the efforts accorded for execution of the aforementioned national plan.

The MoC was signed by Qais Mohammed Al Yousef, Minister of Commerce, Industry and Investment Promotion and Rogerio Nogueira, Regional Director for Marketing in Vale Company.

The MoC was signed in partnership with the Public Authority for Special Economic Zones and Free Zones (OPAZ) and the National Programme for Investment and Exports Development (Nazdaher).

The agreement aims to achieve strategic goals within the framework of Oman Vision 2040.

The signing ceremony was attended by Dr. Saleh Said Masn, Undersecretary of the Ministry of Commerce, Industry and Investment Promotion for Commerce and Industry and Eng. Ahmed Hassan Al Dheeb, Deputy Chairman of OPAZ.