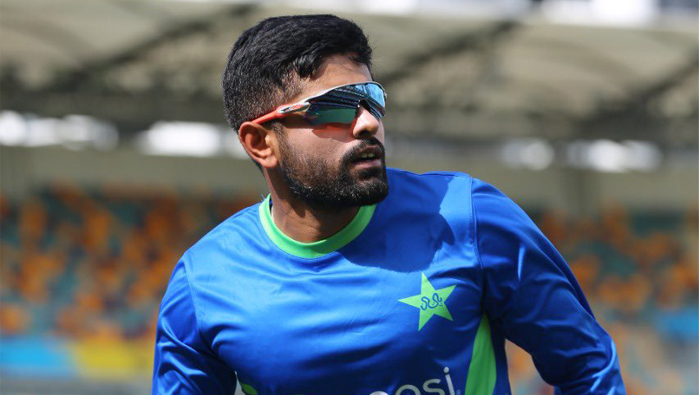 Melbourne : Pakistan captain Babar Azam exuded confidence in his middle-order batting line-up and mentioned that he believes in them to win matches for the team while addressing a press conference in Melbourne on Saturday.

Pakistan’s middle order had been receiving flak for not performing to win matches and the batting order’s overdependency on the opening duo of Mohammad Rizwan and Babar Azam. Although good performances from middle-order batter Mohammad Nawaz helped Pakistan win the T20 Tri-Series in New Zealand before the T20 World Cup. Talking about his middle-order batters he said, “I believe in my team’s middle order. They can help us win games too.”

While talking about the team’s pace attack he said that the pace attack is looking good with the return of Shaheen Afridi and with Naseem Shah also stepping up in the shorter format. He also stated that the team will rely on Haris Rauf’s experience of playing in the Big Bash League in Australia.

“Definitely, our pace attack is good. Shaheen is making a comeback, Naseem Shah is looking good. The way Haris Rauf has played. He has played for Melbourne in the Big Bash on this ground,” stated the Pakistani captain.

He also talked about players’ fitness ahead of the team’s World Cup opener while also sharing an update on Shan Masood after Nawaz hit him during the net session.

“Shan Masood is fine and he has recovered as the reports are saying. Thankfully he is fine. He is fit to play tomorrow’s match. Fakhar is not fully recovered. He is recovering well but he will take a few matches to recover. So, he is not playing against India tomorrow,” informed the right-hander.

Pakistan batter suffered “superficial bruising” after being hit on the head by bowler Mohammad Nawaz during a practice session ahead of the team’s opening match at the T20 World Cup in Australia.

Masood was taken to hospital after suffering a blow to his head during a training session in Melbourne on Friday.

Masood was struck on the right-hand side of his head during a practice session at the MCG on Friday and officials took no risk with the 33-year-old as they took him straight to the hospital for observation. Masood was hit by Mohammad Nawaz while facing the bowler in the nets.

While talking about the threat of rain looming over the clash against India, he said, “Rain is not in our hands but we would want the match to happen as people have come to watch the match.”

“Off the field when we meet, we meet very warmly. We want to meet nicely. On the field, we play with intensity,” stated the batter when asked about the camaraderie between the Pakistani and Indian players.

India and Pakistan will clash at the Melbourne Cricket Ground on October 23.