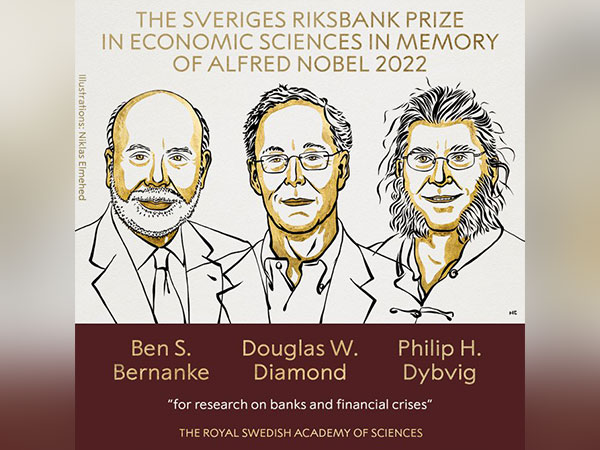 Stockholm: The Sveriges Riksbank Prize in Economic Sciences in Memory of Alfred Nobel was on Monday awarded to Ben S Bernanke, Douglas W Diamond, and Philip H Dybvig for their research work on bank regulation and how financial crises should be managed.

"BREAKING NEWS: The Royal Swedish Academy of Sciences has decided to award the 2022 Sveriges Riksbank Prize in Economic Sciences in Memory of Alfred Nobel to Ben S. Bernanke, Douglas W. Diamond and Philip H. Dybvig for research on banks and financial crises," the official Twitter handle of the Nobel Prize said in a tweet. The work for which Ben Bernanke, Douglas Diamond and Philip Dybvig are being recognised has been crucial to subsequent research that has enhanced our understanding of banks, bank regulation, banking crises and how the financial crisis should be managed.

Ben Bernanke has been awarded the 2022 prize in economic sciences for his analysis of the Great Depression of the 1930s which was recorded as the worst economic crisis in modern history. With the help of statistical methods, Bernanke's analysis found that factors directly linked to failing banks accounted for the lion's share of the downturn.
Whereas, the 2022 economic sciences laureates Douglas Diamond and Philip Dybvig developed theoretical models that explain why banks exist and how their role in society makes them vulnerable to their impending collapse.

The two laureates presented a solution to bank vulnerability in the form of deposit insurance from the government. When depositors know that the state has guaranteed their money, they no longer need to rush to the bank as soon as rumours start about a bank run, the official Twitter handle of Nobel Prize tweeted.

The 2021 Nobel Prize in Economics was awarded one half to David Card "for his empirical contributions to labour economics" and the other half jointly to Joshua D Angrist and Guido W Imbens "for their methodological contributions to the analysis of causal relationships".