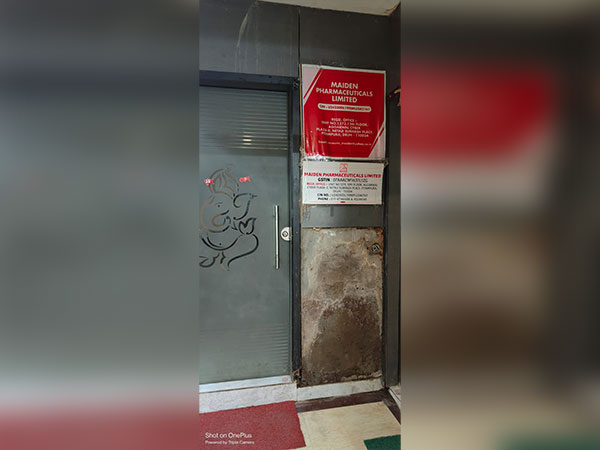 New Delhi: The Indian Pharma company Maiden Pharmaceuticals on Saturday expressed shock over the media reports regarding the deaths of 66 children in the Gambia after consuming cough syrup manufactured by them. In an exclusive input to ANI, the pharma company said, "We are shocked to hear the media reports regarding the deaths and deeply saddened on this incident but we received the official information from our agent at the Gambia on October 5, 2022, and on the subsequent date, World Health Organisation alert was issued against us."

The pharma company Maiden Pharmaceuticals has come under scanner after 66 children died in the Gambia after consuming cough syrup produced in India.

In an official statement the company Director, Vivek Goyal said, "We are in the field of medicines for over three decades and have been diligently following the protocols of the health authorities including Drugs Controller General (India) and the State Drugs Controllers, Haryana," reads the statement.

He further said that they have valid drug approvals for the export of the products his company is not selling anything in the domestic market. He also added that his company is obtaining raw materials from certified and reputed companies.

"The government agencies visited our factory on October 1 and October 3, October 6 and 7 October and the samples were drawn by the Central Drugs Standard Control Organisation(CDSCO) along with all relevant documents in question in presence of our directors," Goyal said in the statement.

The drug regulators have collected the samples of cold and cough syrup from the manufacturing facility of Haryana-based Maiden Pharmaceutical in Sonipat, after WHO issued a medical alert and results are expected to come soon.

"The samples have been drawn by the CDSCO officials and we are awaiting the results and since the matter is already pending investigation and subjudice, we cannot comment on any other issues and shall update you in future as and when we receive the information," he added.
WHO on Wednesday issued an alert over four India-made cough and cold syrups which are made by Maiden Pharmaceuticals in India. WHO has also notified that the same cough and cold syrups could be linked to the deaths of 66 children in Gambia.

As per sources, from the preliminary enquiry, it has been made out that Maiden Pharmaceutical Limited, Sonipat, Haryana is a manufacturer licensed by the State Drug Controller for the products under reference, and holds manufacturing permission for these products. The company has manufactured and exported these products only to the Gambia so far.