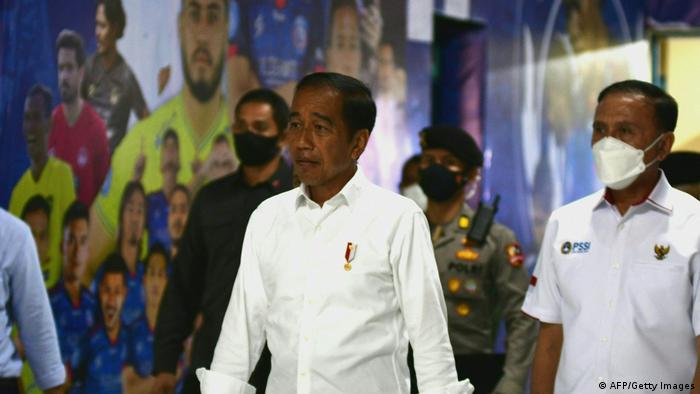 Indonesian President Joko Widodo said Wednesday that he would order the public works minister to "audit all" soccer stadiums as he visited the scene of one of the deadliest disasters in the sport's history.

"We need improvements in the whole management, management of stadium spectators, time, security. It must all be fully audited so that this tragedy won't happen again," he told reporters at the Kanjuruhan Stadium outside Malang city, where at least 131 people died in a stampede on Saturday evening.


Widodo said that the main problem during the deadly stampede in East Java province was "locked doors and steep stairs."

Earlier on Wednesday, he was in Malang to visit relatives of the victims and talk to the wounded at a hospital.

"I want to know the root of the problem that caused this tragedy so that we can get the best solution," he said outside the Saiful Anwar hospital in Malang. After meeting several patients, he told them to "stay spirited."

Widodo said he had spoken by phone to FIFA President Gianni Infantino, who offered his support. "He said if needed, FIFA can help fix Indonesia's soccer management," Widodo said.

Asked earlier about the possibility of FIFA sanctions over the disaster, Widodo said that was a matter for the sport's governing body to decide.

FIFA said the incident was "a tragedy beyond comprehension" and has urged Indonesia's soccer federation to conduct a thorough investigation.

President Widodo was scheduled to symbolically hand over 50 million rupiah ($3,288, €3,311) in assistance to each family who lost a loved one in the stampede on Saturday night, a presidential aide said.

The death toll from the disaster included 37 minors aged 17 or younger, according to the Ministry of Women Empowerment and Child Protection, a governmental body.

How did the stampede happen?


Chaos erupted on Saturday evening after thousands of fans invaded the pitch at Kanjuruhan Stadium in Malang as hosts Arema FC lost 3-2 to rival East Java club Persebaya Surabaya. Police fired tear gas in the direction of supporters in an attempt to stem the wave of pitch invaders, forcing people to scramble toward the exit gates.

The Indonesian Football Association (PSSI) said on Tuesday that a delay in opening the gates contributed to the onrush of fans.

"Some doors were not opened. The reason was ... those who were asked to open ... didn't do it immediately," said Erwin Tobing, a member of the PSSI disciplinary committee.

However, national police spokesperson Dedi Prasetyo offered a different take, saying that the gates were open but were too small.

"The doors were not closed but they were too narrow ... hundreds struggled to get out, causing a stampede," he told reporters on Tuesday.


The PSSI on Tuesday said that two officials belonging to Arema FC, which was hosting the soccer match, would be banned from the sport for life.

Soccer remains hugely popular among Indonesia's 270 million people despite a number of problems to hit the sport in the country, from hooliganism and heavy-handed policing to event mismanagement.

The current death toll makes it the second-most deadly event in soccer anywhere in the world. Only the Estadio Nacional disaster in Lima, Peru, in 1964 with 328 deaths resulted in a greater loss of life.

Indonesia's Liga 1 has been temporarily suspended and home club Arema have been banned from hosting games for the rest of the season.