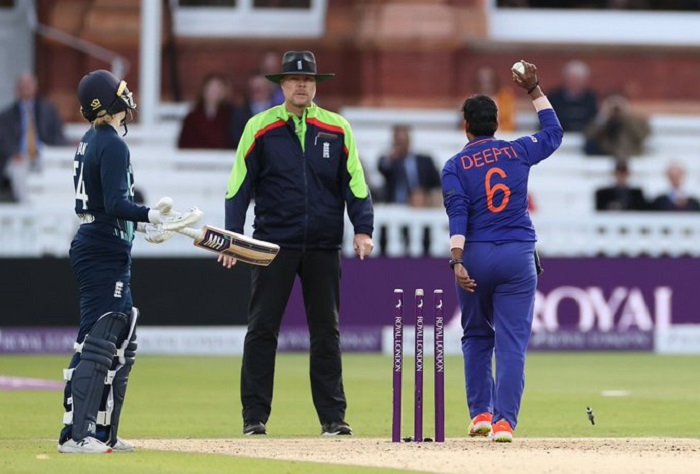 Sometimes, the batter at the non-striker's end leaves his popping crease while the bowler is in his/her final delivery stride. If a bowler sees this, he/she can legally attempt to run out that batter as per the laws of the sport.

This was first done by Indian cricket legend Vinoo Mankad during 1947-48 during India's tour of Australia by running out Australia's Bill Brown at non-striker's end, which earned it the name 'Mankading'. Though many cricketers argue that it is against the spirit of the game, it is totally legal as per the laws of the sport.

Indian cricketers were extremely quick in coming to defence of Deepti.

Ravichandran Ashwin, who had run out Rajasthan Royals' Jos Buttler during IPL 2019 in a similar manner while playing for Punjab Kings, quipped on him trending after Deepti's act, saying that "tonight is about another bowling hero Deepti Sharma"

"Why the hell are you trending Ashwin? Tonight is about another bowling hero @Deepti_Sharma06," tweeted Ashwin.

"Funny to see so many English guys being poor losers. #Runout" tweeted Sehwag.

Former Indian opener Wasim Jaffer also defended Deepti, saying that the ball comes into play when the bowler starts his run up and as a non-striker one must have his eye on the ball.

"It's actually quite simple. Ball comes into play when bowler activates run up. From that moment on as a batter or non-striker you have to keep your eyes on the ball, if you are a bit careless, opposition will get you out. And you can get out at either ends," tweeted Jaffer.

Deepti found support from international players from other countries as well.

Former English spinner also said that though it will be questioned, but mankading is under the laws of the sport.

England opener Alex Hales, who recently returned to international cricket also replied to a tweet by English wicketkeeper-batter Sam Billings, seemingly supporting Deepti, "It shouldn't be difficult for the non striker to stay in their crease til the ball has left the hand..."

But on the other side, Deepti also has received some criticism for her act, notably from England players.

"As Nasser Hussain said on commentary. "No.", tweeted Stuart Broad.

"I find the debate of the Mankad really interesting. So many views from either side. I personally wouldn't like to win a match like that, also, very happy for others to feel differently," he tweeted.

English wicketkeeper-batter Sam Billings also had a lengthy conversation thread on Twitter where he voiced out his displeasure against Deepti's act.

"There's surely not a person who has played the game that thinks this is acceptable? Just not cricket...," said Billings.

James Anderson, England's ageless spin legend also replied to Billings that Deepti had no intentions of bowling the ball.

"Spot on. No intention of bowling the ball," replied Anderson.

Also, as per updated playing conditions of the International Cricket Council (ICC), which will come into effect from October 1, 2022, this method of running out will be moved on from the 'Unfair Play' section to 'Run Out' section following the laws.

Coming to the match, India was bundled out for 169 after being put to bat first by England. Half-centuries from Smriti Mandhana (50) and Deepti Sharma (68) helped Women in Blue avoid humiliation. Pacer Kate Cross (4/26) was England's leading bowler. Freya Kemp (2/24) and Sophie Ecclestone (2/27) also did great for England.

Chasing 170, a brilliant spell from Renuka Singh (4/29) had reduced England to 65/7. Knocks from captain Amy Jones (28) and Charlotte Dean (47) took England close to a victory, but a Deepti Sharma ran out Dean, who was at the non-striker's end to seal a 16-run win for India. Jhulan (2/30) and Rajeshwari Gayakwad (2/38) also starred in India's win. With this victory,

Team India has sealed the series 3-0. They have won their first series against England since 1999.

Will back my players, it shows our awareness: Harmanpreet on Deepti 'Mankading' Charlotte Dean


Indian skipper Harmanpreet Kaur came out in support of all-rounder Deepti Sharma after the latter ran out England's Charlotte Dean at the non-striker end while she was backing up, an act known as 'Mankading', saying that the act speaks about her players' awareness during the game.

Sometimes, the batter at the non-striker's end leaves his popping crease while the bowler is in his/her final delivery stride. If a bowler sees this, he/she can legally attempt to run out that batter as per the laws of the sport. This was first done by Indian cricket legend Vinoo Mankad during 1947-48 during India's tour of Australia by running out Australia's Bill Brown at non-striker's end, which earned it the name 'Mankading'.

Indian skipper Harmanpreet Kaur retaliated during the post-match presentation saying that she does not think her players have done something now and she will back her players because Deepti has not done anything outside of the rules.

"To be honest, I thought you will ask about all the 10 wickets which was not easy to take as well [on being probed about the last wicket]. It's part of the game I don't think we have done something new. It shows your awareness, what batters are doing. I will back my players, she hasn't done something outside the rules," said Harmanpreet.