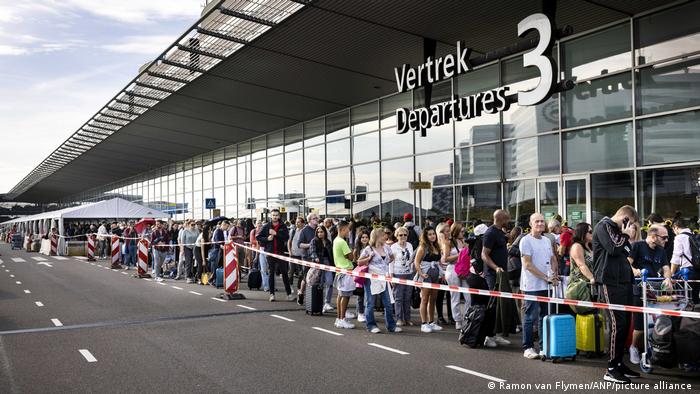 Amsterdam's Schiphol airport will reduce daily passenger numbers by 18% until the end of October due to a shortage of security guards, airport management said on Friday.

The airport has already reduced passenger numbers since July but now wants to cut it even further from 67,500 passengers taking off per day during September to 54,500 and from 69,500 in October to 57,500.

"The reduction is necessary to guarantee the safety of our passengers and employees," Hanne Buis, chief operating officer of the Royal Schiphol Group, said.

He admitted it was "bad news for passengers and airlines."

Dutch national carrier KLM, Schiphol's biggest user, said it was "disappointing" that the airport "will again be adopting these measures at such short notice."

"The measures will have far-reaching consequences for our passengers, colleagues, and the national and international reputation of Schiphol and therefore KLM," the airline said.

"There is a lot of attention, and also criticism, for the way in which Schiphol is tackling the problems and for my responsibility as CEO," Benschop said in a statement on Thursday.

"I am making room on my own initiative to give Schiphol the space to make a new start," he said.

The busy aviation hub on the outskirts capital of the Netherlands has been hit by huge queues and piles of unclaimed baggage over the summer.

"Improvements have been made over the summer, but these are not enough," said Jaap Winter, who chairs Schiphol's supervisory board.

The surge in demand for air travel came after airlines and airports slashed jobs during the COVID-19 pandemic.

At its peak in 2019, Schiphol handled almost 72 million passengers.