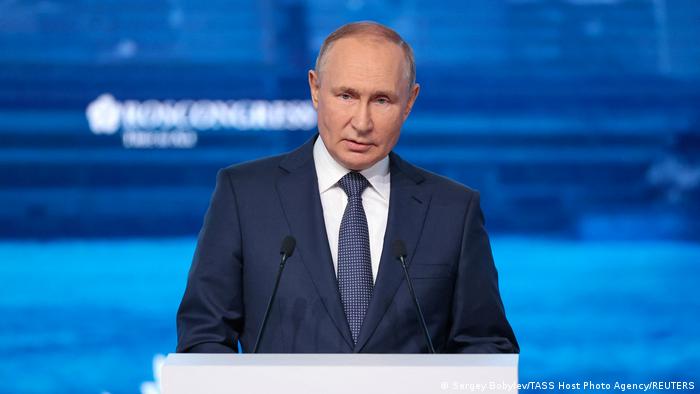 Russian President Vladimir Putin has admitted some sectors of the Russian economy are suffering due to sanctions and political pressure, which he referred to as the "economic, financial and technological aggression of the West," but remained bullish on building new ties with Asia.

Putin made the comments in a landmark speech at the Eastern Economic Forum in the far east city of Vladivostok on Wednesday.

"Other challenges of a global nature that threaten the whole world have replaced the pandemic," the Russian president said.

"I am speaking of the West's sanctions fever, with its brazen, aggressive attempt to impose models of behavior on other countries, to deprive them of their sovereignty and subordinate them to their will."

However, Putin added: "No matter how much someone would like to isolate Russia, it is impossible to do this."


During his speech, Putin said said Russia had been "grossly swindled" by a grain shipping deal that was reached with Ukraine in July. The deal, brokered by Turkey and the UN, was intended to shield the world's most vulnerable people from a looming food crisis.

The Russian president claimed only two out of 87 ships went to poor countries, and said Russia had been unable to resume lucrative fertilizer exports which had been promised as part of the deal. Putin said he would now consider limiting the destinations for grain exports under the agreement.

"The agreements signed in Istanbul ... concern only one issue, and that is the transfer of cargo ships through the Black Sea," Podolyak told Reuters.

"Russia can't dictate where Ukraine should send its grain, and Ukraine doesn't dictate the same to Russia."

Oil and gas in limbo


Russia is the world's largest natural gas exporter, and the second-largest oil exporter after Saudi Arabia.

Putin said Russia would renege on energy contracts if the Group of Seven (G7) countries imposed a price cap on Russian oil, threatening to cut the flow of gas to Europe.


Putin used his speech to lay out a new vision for global cooperation following the February invasion of Ukraine — one in which Iran and other Middle Eastern countries could play a leading role.

"Western countries are striving to maintain a former world order that is beneficial only to them, to force everyone to live according to the infamous rules that they themselves invented and regularly violate, rules they are constantly changing for themselves depending on the current circumstances," the Russian president said.

This was also reflected in the attendees at the summit in Vladivostok, who included Armenian Prime Minister Nikol Pashinyan and senior Chinese legislator Li Zhanshu.

Putin announced that China would buy gas from state energy company Gazprom in a 50-50 split of Russian rubles and Chinese yuan. Russian officials said Putin is expected to meet with Xi Jinping at the Shanghai Cooperation Organization summit in Uzbekistan next week.

"I am very proud of you, because when you came to power in the country, Russia, so to say, became number one in the world," Min Aung Hlaing told Putin, as quoted by a Kremlin statement that translated his remarks into Russian.