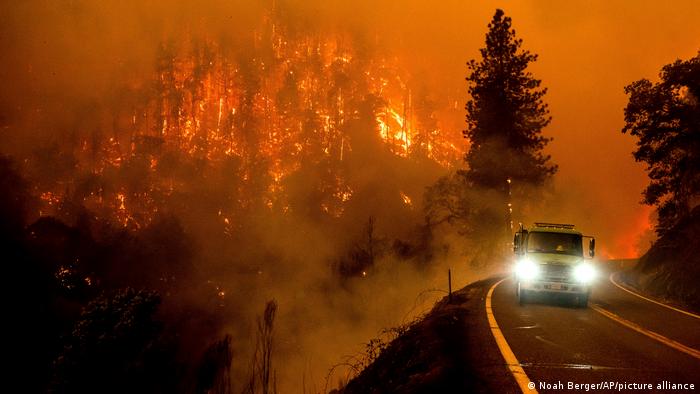 California is experiencing its largest fire this year, with crews fighting to contain it. Thousands have been forced to evacuate their homes.

The McKinney wildfire has ripped through the state's dry terrain, with strong winds and lightning storms expected to complicate the battle. California has already seen multiple fires this summer. The previous largest fire of the state this year, the Oak Fire, had broken out in mid-July.

The fire spanned roughly 80 square miles (207 square kilometers) just two days after erupting in Siskiyou County, according to a Sunday incident report. Its cause is still unknown.

Trees were lit up on California Highway 96, which was closed, and thick smoke covered the area.

Fire not yet contained

"The fuel beds are so dry and they can just erupt from that lightning. These thunder cells come with gusty erratic winds that can blow fire in every direction," Freeman said.

Governor Gavin Newsom declared a state of emergency on Saturday, and said the fire which started on Friday had "destroyed homes and threatened critical infrastructure."

More than 2,000 residents were under evacuation orders, according to the California Office of Emergency Services (OES), mostly in Siskiyou County.

Highway 96 and McKinney Creed Road southwest of the Klamath River were closed to the public, CalFire said.

Fire fighting forces were sent from nearby Oregon to assist in containment efforts, the Oregon State Fire Marshall said, as the Klamath National Forest is also dealing with the Kelsey Creek Fire.

A second, smaller fire to the west was sparked by dry lightning on Saturday. A third fire, which was on the southwest end of the McKinney blaze, prompted evacuation orders for around 500 homes Sunday, said Courtney Kreider, a spokesperson with the Siskiyou County Sheriff's Office.

Fires were also reported in the states of Montana and Idaho.

California, which is facing a punishing drought, still faces further months of fire season. In recent years, California and other parts of the western United States have been ravaged by massive wildfires.

Similar conditions across much of Europe


Scientists say climate change has made conditions warmer and drier in the past 30 years, and such extreme weather conditions are expected to become more frequent and destructive.

Europe is also currently experiencing extreme heat, with a wildfire blazing through Lisbon in Portugal. Fires also burned through about 350 hectares in France.

The Czech-German border is still the scene of forest fires that have been burning for more than a week, with the fire now contained but with authorities not yet ready to give the all-clear.

German Defense Minister Christine Lambrecht and Saxony state's premier Michael Kretschmer are scheduled to visit the area in the eastern state on Monday.