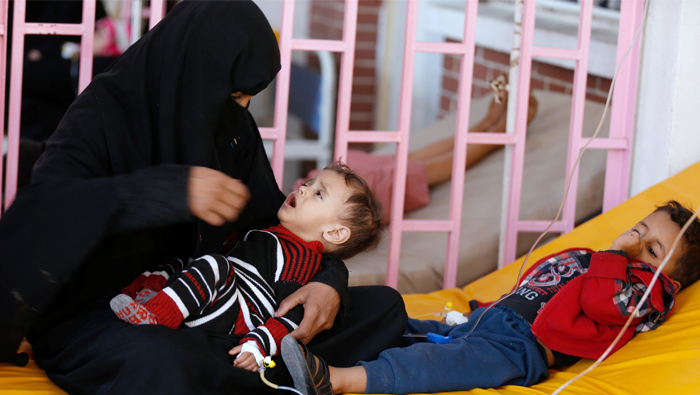 Hodeidah (Yemen): One of the latest victims of the cholera epidemic that has killed more than 2,000 people in Yemen had yet to even take her first breath.
Her mother Safaa Issa Kaheel, then nine months pregnant, was brought into a crowded clinic in the Western port city of Hodeidah by her husband, who had to borrow the travel fare from a neighbour.
"My stomach started hurting more and more," said Kaheel, 37, a hydrating drip hooked into her arm.
Once there, she was referred by nurse Hayam Al Shamaa for an ultrasound scan which showed her baby had died of dehydration -- one of 15 to perish in the womb due to cholera in September and October, according to doctors at the city's Thawra hospital.
"I felt like death," Kaheel said, her voice strained.
"Thank god I survived the (delivery), but my diarrhoea hasn't stopped."
The Red Cross has warned that cholera, a diarrhoeal disease that has been eradicated in most developed countries, could infect a million people in Yemen by the end of the year.
Two and a half years of war have sapped Yemen of the money and medical facilities it needs to battle the contagion, to which aid agencies and medics say the poor, the starving, the pregnant and the young are most vulnerable.
The cholera ward is full of children -- some writhing in agony, others eerily still.
The blanket over one boy too weak to move rises and falls with his shallow breathing.
Save the Children said in August that children under 15 represent nearly half of new cases and a third of deaths, with malnourished children more than six times more likely to die of cholera than well-fed ones.
Millions of Yemenis are struggling to find food and the baking desert plains around Hodeidah are hotspots both of hunger and sickness.
Yemen's war pits the armed Houthi movement against the internationally recognised government of President Abd-Rabbu Mansour Hadi, which is backed by a Saudi-led coalition that has launched thousands of air strikes to restore him to power.
At least 10,000 people have been killed in the conflict.
The country's health sector has been badly battered while a struggle over the central bank has left public sector salaries for doctors and sanitation workers unpaid.
Soumaya Beltifa, spokesperson for the Red Cross in Sanaa, warned that a lack of funds and health personnel were blunting efforts to eradicate the disease, making it unlikely Yemen would be healthy again soon.
"The cholera epidemic has become a norm, leading to complacency in dealing with the disease, not only by civilians but also from the various (aid) organisations," she warned.