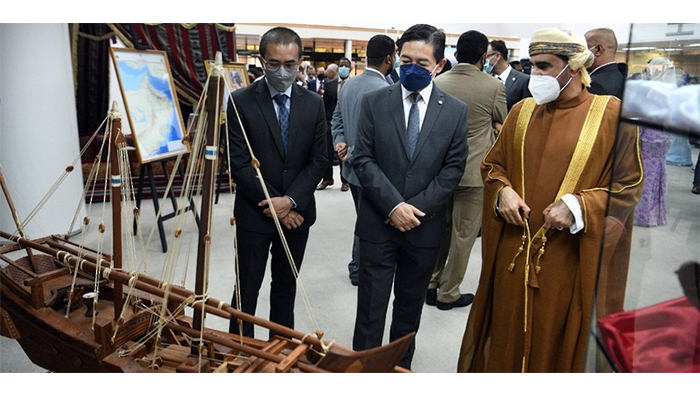 Bandar Seri Begawan: The Sultanate of Oman and Brunei Darussalam explored business and investment opportunities, available incentives and means of promoting economic and business relations between the two countries.

The event, which coincides with the 3rd meeting of the joint Oman-Brunei Committee, includes seminars on investment and education. A heritage and tourism exhibition is also held on the sidelines of the event.

The event aims to broaden the vistas of joint cooperation and exchange of expertise in economic, cultural and tourism fields.

This event comes within the framework of efforts exerted by Oman’s Embassy in Brunei Darussalam to intensify communication between public and private establishments of the two countries.

The Bruneian minister affirmed that the event reflects the advancement of relations between the two countries which share many similar cultural values.

He added that the event highlights the diverse advantages offered by the two countries to encourage investments.
Sheikh Ahmed Hashel Al Maskari, Ambassador of the Sultanate of Oman to Brunei Darussalam said that this event aims to promote cooperation in investment, higher education and tourism fields within the framework of economic diplomacy and general diplomacy in a bid to enhance relations and achieve the aspirations of the two countries’ peoples.

Meanwhile, the event highlights various investments of Oman-Brunei Investment Company, which has a total capital of $200 million in diverse sectors, including aviation, healthcare, tourism, hospitality, industry, communications and education.

The opening ceremony was attended by Dr. Saleh Said Masan, Undersecretary of the Ministry of Commerce, Industry and Investment Promotion for Commerce and Industry, Dr. Hajah May Fa’ezah Binti Haji Ahmad Ariffin, Brunei’s Permanent Secretary at the Ministry of Finance and Economy for Economy, heads of the Diplomatic Missions to Brunei Darussalam and some businessmen, academics and media personalities.