More than 1,500 participate in Yoga Day celebrations in Muscat 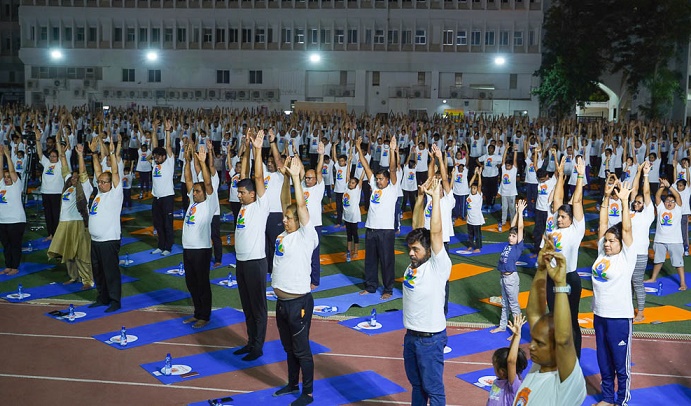 Muscat Yog Mahotsav featured 75 curated Yoga events across Oman – including the cities of Muscat, Salalah, Sohar and Sur, for 75 days till 21 June 2022.

Muscat: Embassy of India in Muscat and Indian School Muscat jointly celebrated the 8th International Yoga Day on 21st June 2022 on the theme, ‘Yoga for  Humanity.’

As part of the celebrations, a common Yoga Protocol was conducted. A soulful rendition by Shri Vineeth Pandit of his own composition on Yoga lent colour to the event. A short video of Yoga performed at the iconic Riyam Park as a run-up to the International Day of Yoga 2022 was also screened. More than 1,500 people, including Omani nationals, media, children and members of the Indian diaspora participated in the event.

Muscat Yog Mahotsav featured 75 curated Yoga events across Oman – including the cities of Muscat, Salalah, Sohar and Sur, for 75 days till 21 June 2022.

The event was graced by the presence of H.E Sheikh Mohammed Ahmed Salem Al Shanfari, Chief of West Asia department.
In his remarks, Ambassador of India to Sultanate of Oman, Amit Narang, expressed his gratitude to His Majesty Sultan Haitham bin Tarik and the people of Oman for the gracious support extended to Indian community.

He also thanked all the yoga organisations, Indian schools in Oman and yoga enthusiasts. He emphasised that the salience of the theme, ‘Yoga for Humanity’, chosen for 8th International Day of Yoga reflected the importance of holistic health in these challenging times. He added that the ancient sciences of Ayurveda and Yoga had been the greatest gift of India to the world.