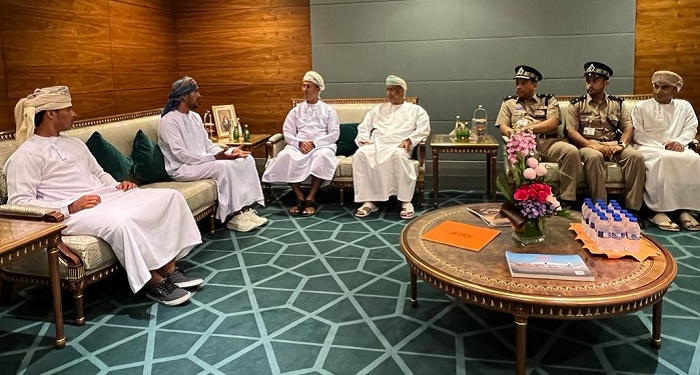 Salim and Ali Al Jaafari became marooned at sea after setting off on their motorboat from their hometown of Al Askharah.

Muscat: The two Omani men who were rescued by Pakistani naval sailors after getting lost at sea for 10 days say they were able to survive their ordeal, thanks to just four litres of water they had with them. Salim and Ali Al Jaafari became marooned at sea after setting off on their motorboat from their hometown of Al Askharah, sipping just a few drops of water at a time so that they could survive until help arrived.

The two were picked up on 19 June by patrol vessel Zhob of the Pakistan Maritime Security Agency, which was acting on orders issued by the government, following a request for assistance issued by Oman on the 18th June.

They reached Karachi on 20 June, and arrived in Muscat later that night, ending a harrowing ordeal for both themselves and their family members, who had undergone plenty of anxiety and worry while the two were lost at sea.

That they were found is not due to one, but two big strokes of luck: On 18 June, a Pakistani fishing vessel was able to locate the two Omanis in the middle of the sea, in Pakistani territorial waters.

They were found off Baluchistan province, close to the maritime boundary with Iran, some two days away from Karachi.

One of the fishermen called their family in Oman from a sat-phone provided by the Pakistani fishermen, and on receiving his call, his family reported to the Omani authorities that they were off the coast of Pakistan.

As part of efforts to assist the Pakistanis in search and rescue, that number was shared by the Omani authorities with their Pakistani counterparts, but because of the rough weather, the signal of the cell phone was lost. The navy subsequently found them at noon on Sunday.

“While some of the joint naval exercises that we carry out with other countries are directed towards warfare, the main objective of these drills is to help navies detect smaller craft and assist people, by preventing activities such as smuggling, and rapidly responding to distress calls,” said Mohammed Imran Ali Chaudhry, ambassador of Pakistan to Oman.

“It is likely that the two men were housed at the naval base in Karachi,” he explained. “This is not just because of protocol, but also because they are close to good medical facilities, just in case something happens to them after their long ordeal at sea.”

Dr Mohammed Omar Al Marhoun, the ambassador of Oman to Pakistan, added: “We didn’t expect to find them after they were lost at sea for 10 days, because the Arabian Sea and the Indian Ocean have very unpredictable weather patterns, such as strong air currents, storms, rough seas, and so on.”

He said: “However, we kept searching in cooperation with the Pakistani authorities in the form of the Pakistan Maritime Security Agency, but owing to dangerous weather conditions, we were unable to find them.”

Although requests like the one sent to Pakistan by Oman are rare, these are often received by countries that share maritime boundaries with each other.

“Today’s navies are equipped with long-range, sophisticated detection instruments that help them greatly during search and rescue missions, and the coordinates of missing persons are repeatedly circulated to ships, so that vessels that sail near the area where they were last seen can keep an eye on them,” said Chaudhry.

The two men were found on a skiff, a small motor-powered boat primarily used for fishing, among other activities, which had a shade fitted to it to keep them shielded from the harsh rays of the sun. That they were found in good health after so many days at sea left the ambassador pleasantly surprised.

“To survive an extended time out at sea is no easy matter, and thank god these men were well, even after facing the rigours of the open water for so long,” he said.