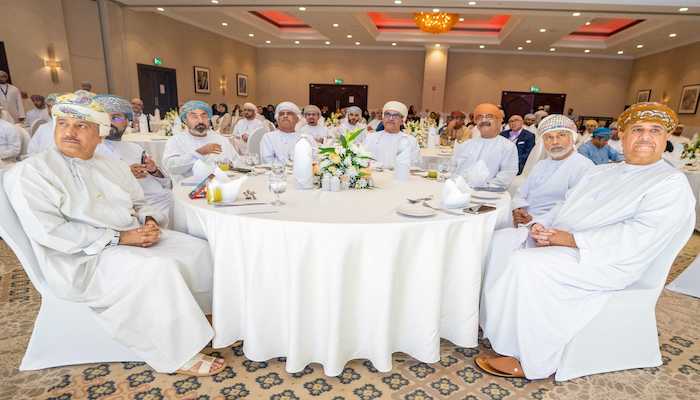 Bank Muscat, the leading financial services provider in the Sultanate of Oman, recently hosted a special annual event for officials from media institutions and agencies in the Sultanate. The event was attended by Sheikh Waleed K. Al Hashar, Chief Executive Officer, Bank Muscat, chief editors and media officials as well as members of the Bank’s Management Team. The event was an opportunity to extend Bank Muscat’s appreciation for the effort shown by the media in constantly following and covering the Bank’s events throughout the year as well as its pioneering role in social responsibility. The Bank also unveiled the logo of its 40th Anniversary celebrations at the event, which saw a documentary about the Bank’s journey.

Addressing senior media officials gathered at the function, Sheikh Waleed K. Al Hashar, Chief Executive Officer, Bank Muscat, expressed his gratitude for the successful partnership between the Bank and the media. He stressed on the importance of this cooperation to achieve success that benefits the banking sector and the nation. Sheikh Waleed K. Al Hashar extended his sincere appreciation to all media professionals for their efforts in publicizing knowledge about various developments, thereby contributing to socio-economic progress in Oman.

The Chief Executive Officer pointed out in particular, the important role that the media has been playing over the past four decades in enhancing the Bank’s communications with society. He thanked the media for effectively conveying to society the Bank’s stellar achievements in financial inclusion, economic development and social responsibility. He said that the Bank would continue to keep pace with new developments in the media sector including social media. Sheikh Waleed K. Al Hashar added that Bank Muscat would continue its commitment to customer-centricity and sustainable development as part of its efforts to translate the goals of Oman Vision 2040 into reality.

Bank Muscat has been a pioneer and trendsetter in Oman’s financial services sector, being the first bank in the country to launch various new products and services, cutting-edge technology and extensive social responsibility programmes and initiatives over the past four decades. The Bank grew from just one branch and a small number of customers in 1982, to having 174 branches and over 800 ATMs and CDMs catering to more than 2 million customers today. The Bank has expanded its regional presence through international branches and representative offices. It is noteworthy that the Bank’s assets have grown manifold from RO 16 million in 1982 to well over RO 13 billion at present. Bank Muscat enjoys outstanding leadership at all levels, achieving over 95 per cent Omanisation and  gender equality among its over 3,800 employees. It prioritises developing Omani human resources by upskilling and enabling nationals to occupy key positions across all aspects of its operations. The Bank’s various achievements across different spheres are a source of inspiration for many other organisations to both excel, and to do more for society.

Aimed at promoting a partnership in the progress and sustainable development of the nation, Bank Muscat pursues a dynamic communication policy, maintaining strong relations with the media. The Bank frequently interacts with the media to highlight major achievements and developments, which are of interest to the public. Interacting regularly with media partners contributes greatly to the Bank’s ability and flexibility to adapt to a rapidly changing environment and enhancing communications and further exchange of knowledge. As the leading Bank in the Sultanate, Bank Muscat strives for continuous improvement as part of its strategy of achieving excellence and maintaining market leadership that benefits the Bank’s various stakeholders.