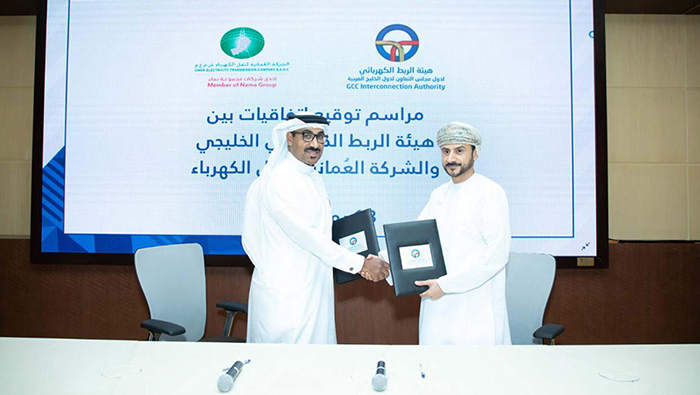 Muscat: Oman Electricity Transmission Company (OETC) signed three agreements with the Gulf Electricity Interconnection Authority, at the authority's headquarters in Saudi Arabia in Dammam, in the presence of the stakeholders and representatives of both parties. OETC was represented by the CEO, Eng. Saleh bin Nasser Al-Rumhi, and a number of managers of the company's departments.

As for the second agreement, it provided for the provision of operating and maintenance services for the electrical link, whereby OETC will manage the link entirely, and the authority has the exclusive right to use the assets of the electrical link in case of emergency and the exchange of other energy.

The third agreement provided for the operation of the electrical link between the two parties.

Regarding these agreements, Eng. Saleh bin Nasser Al-Rumhi pointed out the importance of these agreements. Since November 2014, the Sultanate of Oman has officially signed the general agreement with the Gulf Cooperation Council and has become a member of the Gulf Electricity Interconnection System, after being connected to the electricity transmission network of the GCCIA network, which is considered part of the Gulf Electricity Interconnection System.

Al-Rumhi also valued the role played by the GCCIA Electricity Interconnection by increasing the reliability and security of networks and providing high financial savings through trade exchange, and by sharing spare capacity.

It is worth noting that OETC is the company responsible for the transmission and control of electricity in the northern Sultanate’s network and also in the Governorate of Dhofar, where electricity is transferred from production stations to distributed load centers in all governorates of the Sultanate. The transmission network operates at a voltage of 132 kV and above to cover most governorates of the Sultanate, whether in the north or in the south. Also, OETC manages the interconnection lines between the Sultanate and the Gulf interconnection network with a voltage of 220 kV.