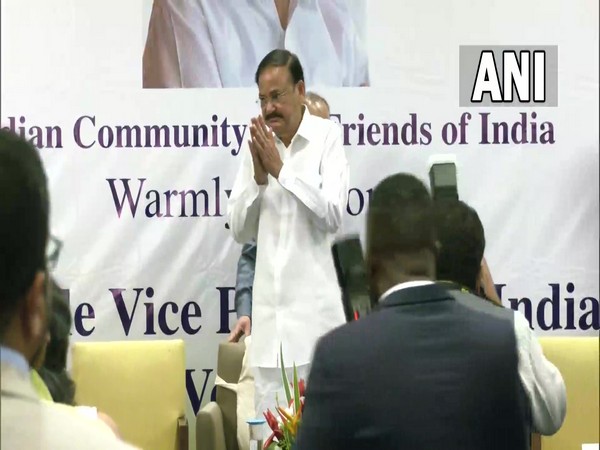 Libreville: Interacting with the Indian diaspora in Gabon, Vice President Venkaiah Naidu has said that despite being only 1,500 in number, the community has made a significant contribution in various fields in the country.

Naidu is on a three-nation tour to Gabon, Senegal and Qatar. Vice-President Naidu's visit to Gabon was the 1st leg of his tour.

He had very extensive interaction with the leadership of Gabon. He called on Gabon's President Ali Bongo Ondimba, covering various areas of cooperation.

Pradeep Bhavani, a businessman who has lived in Gabon for 10 years said: "India has a good future in Gabon. At least 45 enterprises have invested here. Africa is an undiscovered natural resource. India should discover those resources here."

"The investment sector includes mining, mineral resources, natural tourism, and medical sector," he added.
While another businessman, Hitesh Punjabi from Rajasthan's Jodhpur said that Indian community has increased in Gabon after President's visit to India.

"I m very positive about the bilateral relations between both the countries," Hitesh who has lived in Gabon for 12 years told ANI.

African country Gabon is truly looking for enhancing its partnership with India during Vice-President M Venkaiah Naidu's visit to the nation.

In a special briefing on Vice President's visit to Gabon, Dammu Ravi, Secretary (ER) said, "Gabon is truly looking for enhancing its partnership with India. They feel that it's time for them to diversify their economy and be partners with India, particularly in the energy sector."