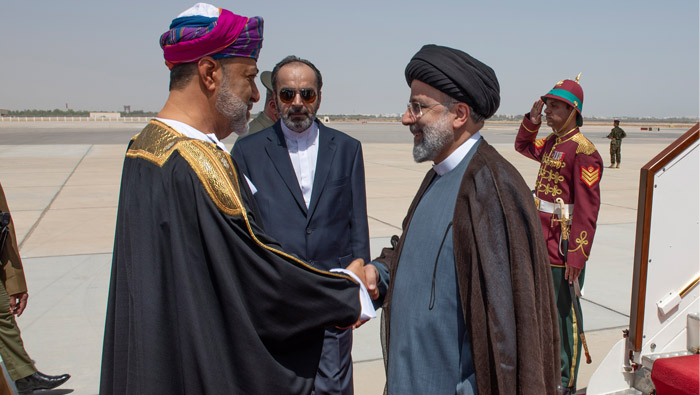 Muscat: President Dr. Ebrahim Raisi of the Islamic Republic of Iran arrived in the Sultanate of Oman on an official visit lasting one day.

The Iranian president was received with tremendous fanfare.

His Majesty Sultan Haitham bin Tarik led the welcoming party for the Iranian President. When the jet of President Raisi touched ground at the Royal Airport, His Majesty the Sultan met the guest at the foot of the ramp, welcoming him and wishing him and his official delegation a pleasant stay in Oman.

Along with His Majesty the Sultan, the Iranian President was received by Sayyid Khalid bin Hilal Al Busaidi, Minister of the Diwan of Royal Court, Gen. Sultan bin Mohammed Al Nu'mani, Minister of the Royal Office, Sayyid Hamoud bin Faisal Al Busaidi, Minister of Interior, Sayyid Badr bin Hamad Al Busaidi, Foreign Minister, Eng. Said bin Hamoud Al Ma’awali, Minister of Transport, Communications and Information Technology (Head of the Mission of Honour), Ibrahim bin Ahmed Al Muaini, Ambassador of the Sultanate of Oman to the Islamic Republic of Iran, Ali Najafi, Ambassador of the Islamic Republic of Iran to the Sultanate of Oman and members of the Mission of Honour.

Then, His Majesty the Sultan and the President of Iran headed to the reception hall, passing through two rows of the guard of honour of the Royal Guard of Oman (RGO).

After a short stay, the motorcade of His Majesty the Sultan and his guest President Dr. Ebrahim Raisi left the Royal Airport heading to Al Alam Palace for an official reception ceremony.

Before the arrival of the main vehicle of the motorcade at Al Alam Palace, a squadron of cavalry lined the two sides of the road heading to the gate of the palace.

His Majesty the Sultan accompanied the President of Iran to the Dais of Honour where the Royal Anthem of the Islamic Republic of Iran was played, while the artillery fired a 21-gun salute for the guest.

After that, His Majesty Sultan Haitham bin Tarik and President Dr. Ebrahim Raisi proceeded to the hall where they took Arabian coffee and exchanged cordial talks.

The visit is an opportunity to explore areas of interest to the two neighbouring countries, with a view to realizing their aspirations.