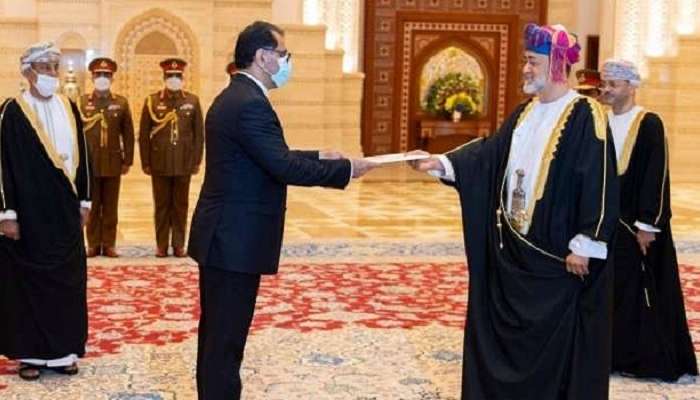 Muscat: The Sultanate of Oman and the Islamic Republic of Iran are bound by historically deep-rooted relations that were enhanced over the past 50 years by joint cooperation, mutual interests and good neighborliness.

The forthcoming meeting of His Majesty Sultan Haitham Bin Tarik with President Dr. Ebrahim Raisi of the Islamic Republic of Iran on Monday comes at a time the world is witnessing different regional and international events of concern to the region, both politically and economically. These issues require the exchange of views between the two countries in a manner that contributes to serving their interests, as well as the interests of the region.

The number of Iranian companies investing in Oman stood at 2,710 firms, of which 1,163 invest at an ownership rate of 100% and 1,547 operate as part of Omani-Iranian partnership.

In the logistics sector, good growth has been realised in the commodities handled at Omani ports, run by Asyad Group, notably in the ports of Al Suwaiq, Shinas, Khasab and Port Sultan Qaboos—which all engaged in active import and export of general goods with their regional counterparts, including Iranian ports.

Statistics show a high volume of direct import and export between Omani and Iranian ports over the past few years, with more than 1.4 million tons of goods handled at a rate of 5 to 7 trips per day.

Also, over the past few months, Muscat and Tehran saw an exchange of business delegation visits during which the business community in both countries showcased investment opportunities. These will definitely reflect positively on the volume of commercial exchange in the future. During the visit beginning after tomorrow (Monday), the two countries are expected to sign memoranda of understanding in economic spheres, in addition to the areas of infrastructure, legislation and investment promotion.

The 19th session of the Omani-Iranian Joint Committee, held in Muscat last February, indicated the two countries’ desire to upgrade cooperation in the areas of industry, mining, finance, banking, free trade zones and research in the fields of agriculture, fisheries and livestock.

In the political arena, it is noted that Omani-Iranian relations are based on solid foundations of good neighborliness and non-interference in internal affairs. This stance contributed to resolving contemporary regional issues. The two countries hold regular sessions of political talks, the most prominent of which was the session held in Muscat last January where a number of issues were discussed, including Vienna talks on the resumption of the Iranian nuclear programme, which reached its final stages. Through its reputed diplomatic tact, the Sultanate of Oman lend strong support to the 2015 Iran nuclear deal.

The forthcoming visit constitutes yet another opportunity to enhance diplomatic efforts on the Iranian nuclear file, as well as other issues like the Yemeni crisis, which assumes focal significance to regional security and stability and promotes international security and peace.

Omani diplomacy has always furnished grounds for rapprochement and understanding about issues of dispute between Iran and other countries. Also, the Sultanate of Oman contributed to the release of citizens of different countries held by Iranian authorities on security concerns.