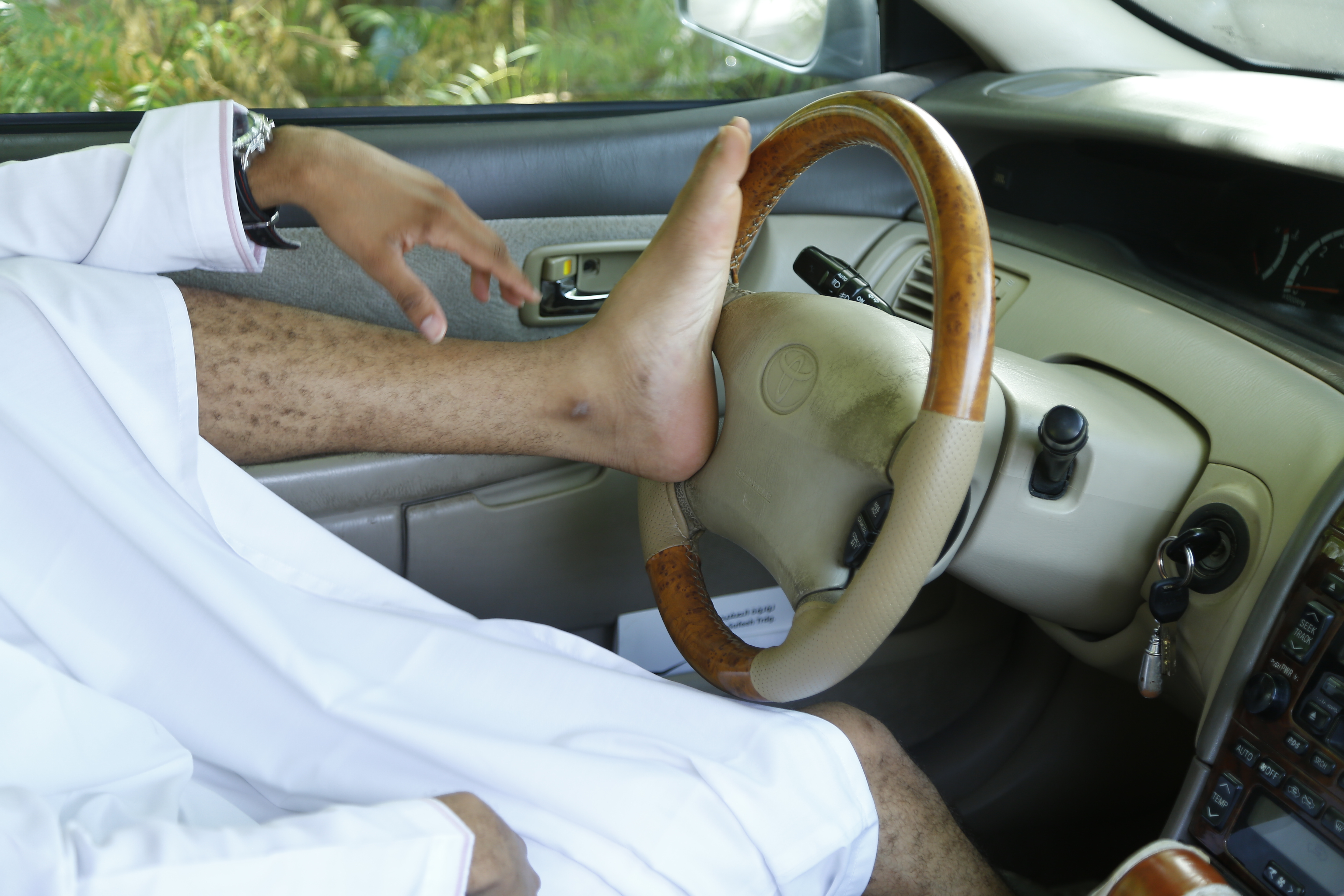 Muscat: Using feet, knees or anything else besides your hands to guide a vehicle’s steering wheel is considered reckless driving, and offenders are putting lives at risk, according to road safety experts.
Some young drivers are customising their car seats so that they can lie back and use their feet to steer, with the car on cruise control.
Others steer with their knees while chatting to friends on the phone and even make videos of themselves while driving to share on social media.
“This is dangerous and it endangers him and everyone else on the road. It’s illegal because it’s connected to fatalities when you drive negligently,” a spokesperson from the Royal Oman Police (ROP) said.
One resident told the Times of Oman: “I was heading to work and a young Omani overtook me on the flyover. I glanced over and saw that he was almost horizontal in his car and was using his bare feet to steer the car.”
“The shock almost made me lose control of my car. He was easily driving at 100 kilometres an hour. It was so dangerous I found myself slowing down to allow him to get as far from me as possible.”
“They think they can control the steering wheel by keeping it straight, but this is really just ignorance,” Oman Road Safety Chief Executive Officer (CEO), Ali Al Barwani, said.
“What they do is they train themselves and push their seats all the way back so they can sit with their friends, as if he is the commander. We don’t need to be experts to know that this is negligence,” Al Barwani added.
Although this behaviour is not widespread, it still takes place in Oman.
“A lot of people might see this for the first time and would be distracted so this also affects other drivers. Even disability cars are customised to accommodate the disabled, but they don’t drive with their feet steering the vehicle,” Al Barwani stated.
According to the safety expert, when using feet to guide the steering wheel, any slight distraction could result in losing control of the car.
“Any little thing and he could lose immediate control. This is not a playground, this is a street. In these situations, the control is totally low. Distractions are everywhere from the phone ringing, other cars and to even bad smells. They think they can control keeping the steering wheel straight. It is a true ignorance.”
“By law, there is no excuse for endangering others. The person should be punished in the same manner as the car drifters are, since they are both using the vehicles in a dangerous and reckless way. There is no excuse,” Al Barwani said.
Just within the first half of this year, 314 people lost their lives due to car crashes despite a decrease in the accident rate, according to the NCSI.
“There was a decrease in the number of road accidents in Oman by 18 per cent and reduction in the mortality rate by 6.5 per cent during the first half of the year 2017, compared with the same period in 2016,” the NCSI said.
Since the beginning of the Salalah Khareef (monsoon) season, 26 people have died on the road leading to Salalah.
Last Monday, an accident occurred along the Haima road, killing two people, ROP had reported.