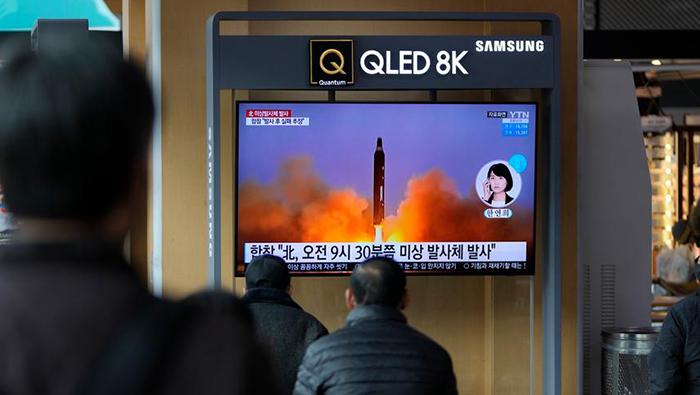 Seoul: North Korea on Sunday fired a short-range multiple rocket launcher, the South's military said. It was the latest in a series of weapons tests amid heightened tensions in the region.

"This morning there was firing in North Korea which is assumed to be multiple rocket launcher shots, and our military was monitoring the related situation and maintaining a readiness posture," South Korea's Joint Chiefs of Staff said in a statement.

North Korea has launched a string of banned weaponry this year, including artillery and rockets that could potentially strike targets in the South.

North Korea's military fired four shots around 7:20 am in a span of about an hour.

The shots were fired toward the western waters from an unidentified location in South Pyongan province, according to the Yonhap news agency.

It comes days after a failed missile firing that was Pyongyang's 10th weapons launch this year. The test involved parts of the North's Hwasong-17 missile, its biggest weapon, according to South Korea's military.

South Korea's National Security Council held an emergency meeting over the launch. The intention behind the firing was still being determined.

The council called for a tight readiness posture to "prevent security vacuum during the government transition period", the president's office said.

The South's president-elect Yoon Suk-yeol is expected to begin his single five-year term on May 10.

North Korea has conducted an unusually high pace of missile launches this year.

Just days earlier, it carried out a suspected failed ballistic missile test. The US and South Korea suspect it plans to fire an intercontinental ballistic missile (ICBM) at the full range for the first time since 2017.

While North Korea is calling it a "reconnaissance satellite," both Washington and Seoul suspect it to be a new ICBM system disguised as a space launch.