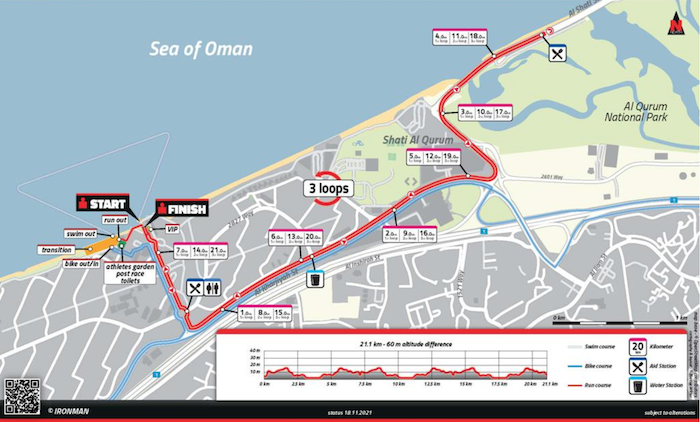 Image: The running route for the triathlon

Muscat: Vehicular movement will be restricted in and around the venue, where the Ironman Championship will be hosted on Friday.

The Royal Oman Police, in a tweet said, “The Royal Oman Police - Department of Relations and Security Media - announces that on the occasion of the Sultanate’s hosting of the IronMan Championship, which will be held on Friday, roads will be closed for vehicles around the event area and for roads being used for the biking part of the triathlon."

The cyclists start from the rear parking lot of Seef Mall, then head to Al-Masa Mall signs, turn right, then continue to the signs opposite the Bowsher Police Station, then pass behind the Ministry of Housing and Urban Planning to the roundabout from Al Thaqafa roundabout.  In front of the Ministry of Health and return again from the same opposite lane. When you reach the Ministry of Foreign signals, turn right to the traffic lights, then turn left to Sultan Qaboos Street, Darsait Al Qurum Street, and head to the Bahri Road (Muttrah Corniche) passing in front of Al-Alame Palace - Al-Wadith Al-Kabeer Street  Under the Darsait bridge opposite Lulu, the path turns towards Ruwi, passing in front of the (former) Ministry of Sports Affairs building, then heading to the Wilayat of Amerat via the Wadi Uday Bridge, then continuing to the roundabout opposite the Amerat Police Station, then returning to the Wadi Uday Bridge and continuing to the Qurum Signal Bridge and then continuing  to the right opposite the Opera Roundabout, and when you reach the Opera House signs, turn left to the Opera Roundabout.  Massa Mall and then turn right to reach the starting area.