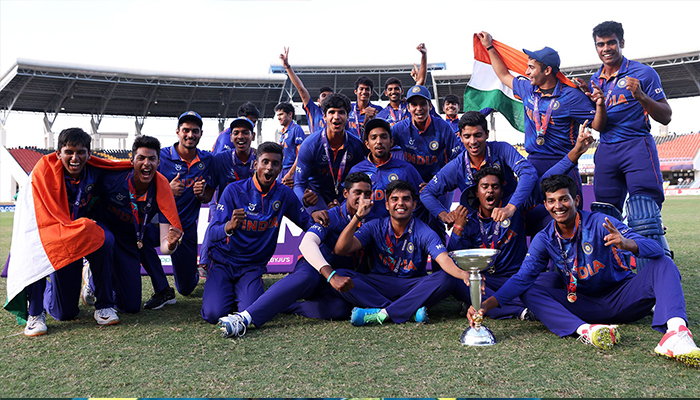 New Delhi  : Prime Minister Narendra Modi on Sunday congratulated Team India on winning the U19 World Cup title, saying the performance shows that the future of Indian cricket is in safe and able hands.

"Extremely proud of our young cricketers. Congratulations to the Indian team for winning the ICC U19 World Cup. They have shown great fortitude through the tournament. Their stellar performance at the highest level shows that the future of Indian cricket is in safe and able hands," tweeted Modi. India lifted a record fifth U19 World Cup title after defeating England in the summit clash here at the Sir Vivian Richards Cricket Stadium on Saturday.

Taking to Twitter, Assam Chief Minister Himanta Biswa Sarma said: "My heartiest congratulations to the Indian U 19 cricket team. By winning the ICC U19 World Cup, our young cricketers have shown great temperament & attitude. This win makes us immensely proud as it adds yet another glory in India's soaring sports saga. Well done boys."

Few of the squad members including Shaik Rasheed and Yash Dhull had tested positive for COVID-19 midway through the tournament, but whoever stepped in did their role perfectly and India did not lose a single game in the 2022 U19 World Cup.
Raj Bawa scalped five wickets while Ravi Kumar took four as England was bowled out for 189. Nishant Sindhu and Shaik Rasheed then played knocks of 50 each as India won the final by four wickets.