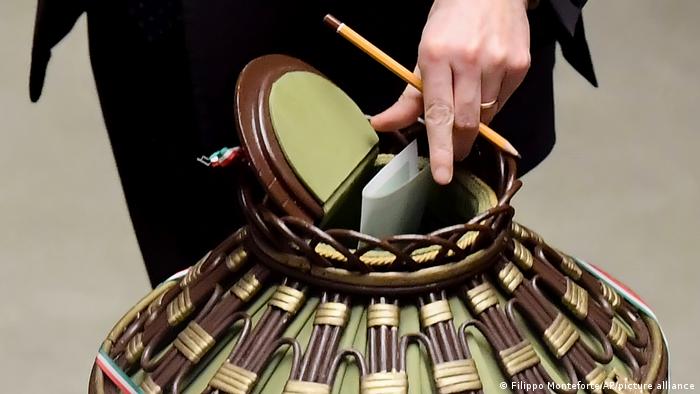 No winner was declared after Italy's sixth round of voting in the presidential election ended on Friday.

At the start of the fifth day of voting, nationalist League leader Matteo Salvini attempted to break the deadlock by telling his party members to vote for conservative Senate president, Maria Elisabetta Alberti Casellati of the Forza Italia party.

What were the results of the voting?


Casellati's candidacy won only 382 votes from electors in the fifth round, short of the simple majority of 505 needed. In earlier rounds, a two-thirds majority was required.

Of the 1,009 lawmakers and regional delegates given a vote, 406 representatives abstained from voting in the fifth round.

A sixth round, held on Friday evening, also failed to determine a winner. Center-right bloc leaders indicated that their electors were sitting out that round.

Who else is in the running for Italy's presidency?


Despite appeals from some party leaders, outgoing president Sergio Mattarella has repeatedly said that he doesn't want a second term. Mattarella gained the most votes in the sixth round, with 336 representatives lending him support. The extended stalemate may convince more parties to request Mattarella to accept a second term in office, even though the 80-year-old has ruled it out.

The current prime minister, Mario Draghi, has left the door open for his election to the presidency, but leaders are wary of removing him from the premier's spot in fear that the government could collapse and lead to new elections.

Salvini and Berlusconi have insisted that he stay in his current role to help guarantee the implementation of an EU recovery fund of nearly €200 billion ($227 billion) in exchange for structural reforms.

Although the office of president is largely ceremonial, the president does have the power to stop legislation and dissolve parliament.