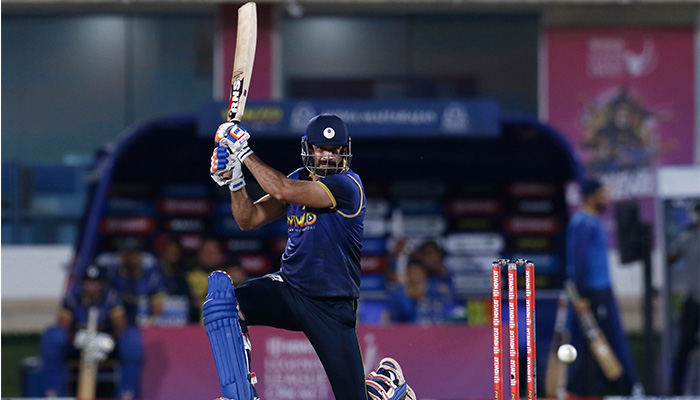 World Giants defeated India Maharajas by five runs in a Legends League Cricket match.
Muscat: World Giants defeated India Maharajas by five runs in a Legends League Cricket match at Al Amerat on Thursday.
World Giants scored 228/5 in 20 overs but India Maharajas could score only 223/7 in their allotted overs.
Maharajas had come close to victory but two wickets in the last over robbed them of the much-needed win. Irfan Pathan was in good knick and he singlehandedly powered Indian Maharajas on course to win with some lusty hits to the fence.
With a strike rate of 266.66, Irfan scored 56 (3x4 6x6) runs in 21 balls but was caught by M Morkel of the bowling of Brett Lee in the last over of the match.
In the last over India Maharajas needed eight runs from six balls but they could score only two runs with the loss of two wickets including the prize wicket of Irfan who had smashed two hits over the rope in the penultimate over to bring his side closer to victory.
In the post-match press conference, Irfan was a bit dejected over the close loss. He said that coming after an injury getting into the right rhythm is not easy but was quite happy middling the balls. He scored one of the fastest fifties of the tournament and was in rollicking form during his stay at the crease.
When asked about incisive bowling skills of Brett Lee and Morne Morkel in their 40s, he said that they are still very good and come fully prepared when they bowl at this level. No one comes here unprepared, they practice for some time before joining the team, Irfan said.
He praised former Indian Captain Virat Kohli for his stupendous batting average and his fighting skills. While calling Rohit Sharma a super cool captain, Pathan said Kohli has the best winning average among all the Indian captains.
He lauded the BCCI for holding Syed Mushtaq Ali and Vijay Hazare tournaments despite the Covid pandemic as it helps in preparing new crop of players.
Pathan also lauded young Deepak Jagbir Hooda who is an all-rounder and bats right-handed while bowling right-arm off break. He hoped Hooda will fill the vacant slot of a good allrounder in the India team.
World Giants captain Daren Sammy was a happy man and satisfied with his team’s performance.
He said that we have come here to win and hopefully we will be the winners in the Saturday’s match. “We are eying the glittering trophy kept on the ground inside the stadium,” quipped Sammy.
He said that Indians are a strong team but the West Indies side would give them a good fight in the upcoming series.