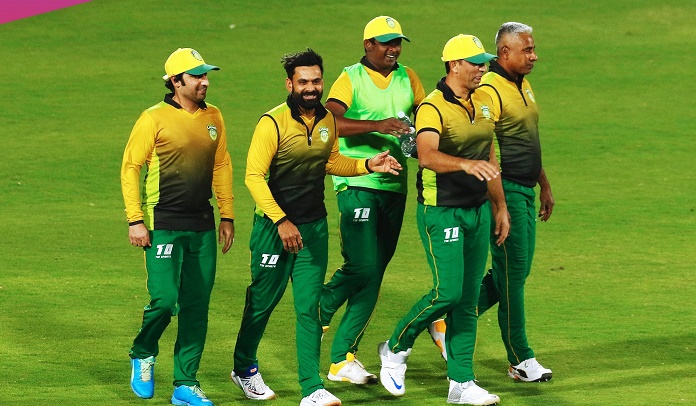 Legends League Cricket is a great concept for all the legends to continue playing, renew friendships they made, and resume the battles they had when they played international cricket.

Hafeez is part of the Asian Lions squad that beat O’Brien’s World Giants at the Twenty20 event, and despite the rivalry both sides may show each other on the field, they could not be more in sync off it.

“Above everything, as a fan of cricket, I enjoyed this competition, where all the legends of the game – many of them top stars of the world – are once again on the ground and showing their skills. I am so happy and it is such a pleasure to watch them,” said Hafeez, in his post-match press conference.

“The competitiveness levels may not be as high, but for them to return to the ground, take the efforts to play, and show their skills once again, watching them bowl and watching them bat is something very special,” he added.

Hafeez’s Lions beat the World Giants by six wickets. After the Lions put up a score of 209/4, the Giants came up just short in their chase, finishing at 205/7. It was in some ways a double blow for ex-Ireland international O’Brien, who missed out on both his century and a win, after top-scoring with 95 runs off 46 balls.

“It was a very good wicket and I really enjoyed batting out there. Unfortunately, we couldn’t defend the score, but we will come back tomorrow,” said O’Brien.

Sharing his thoughts on what the tournament meant to him, the all-rounder said, “It is brilliant: you can see that the standard is still really good… the batters are batting really well and the bowlers are still putting the effort in. I think it is a great concept for all the legends to continue playing, renew friendships they made, and resume the battles they had when they played international cricket, it is a really good concept.

“The fans seem to enjoy it as well. As a kid growing up in Ireland, I watched a lot of test cricket on TV,” he added. “You watched the likes of Shoaib Akhtar running in and bowling unbelievably fast, you watched Mohammed Yousuf playing, and I have been lucky enough that I’ve been able to play against these guys over the years when I played for Ireland, to play with them again is a big challenge.”

Praising his teammates, O’Brien added: “To play for the World Giants, with the likes of Ryan Sidebottom – a World Cup winner with England, Kevin Pietersen – one of the greatest batsmen of all time, and you see Morne and Albie Morkel from South Africa, so it is great to be able to play with these legends as well.”

Echoing the Irishman’s sentiments, Hafeez chipped in with: “Well, the intensity level is not that much, but personally, I am here to once again watch these legends. I am so happy to be a part of this league…I don’t think we should be more critical of whether someone does well or does not do well. It is a wonderful initiative, and I am personally very happy and want to congratulate the organisers who had this mindset to bring all these players together.

“As a fan of the game, I am very happy,” he went on to say. “As a cricketer, I feel this is great entertainment for the fans. They get to once again see the players they watched previously, like [Muttiah] Muralitharan, Shoaib Akhtar, other players like Kevin Pietersen, these are people all of us idolised, and to see them once again, as a fan, I am so happy.”