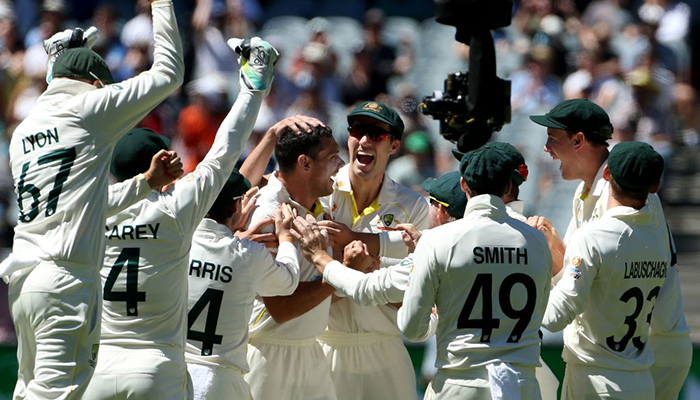 Melbourne: Australia captain Pat Cummins was all praise for his team after regaining the Ashes on day three of the 3rd Test here at the MCG on Tuesday.

Scott Boland returned with figures of 6/7 in his four overs as Australia defeated England by an innings and 14 runs in the third Ashes Test.

With this win, Australia regained the Ashes as the hosts took an unassailable 3-0 lead in the five-match series. Pat Cummins in the post-match presentation said: "It's pretty insane...an awesome few weeks, so proud of the group. Everything has clicked. So happy for Scotty in front of his home crowd. I think we've been relentless. The bowlers have owned that good area. Some big partnerships, they have earned the right to bat long. They've been really brave and taken on the game."

"Michael Neser, really disappointed he didn't get the chance, but a great sign of the strength of Australian cricket. We were really confident Scotty would do a great job. Maybe not 6 for 7! Any Ashes series is when you try and make a mark on your Test career. Last series was 4-0, one before that was 5-0, so a chance to start cementing our identity," he added.

Player of the Match is Scott Boland who got the Mullagh Medal in a hugely significant moment said: "Coming here today, though we had a good chance. Found out on Christmas Eve, told some family and friends. Thought it was going to be really tough, a big step up. Hoping to make a little bit of an impact. Like to thank the crowd for all the support, really appreciate it."

In 2018, Scott Boland travelled to the UK to retrace the footsteps of Johnny Mullagh and the 1868 Aboriginal XI. Talking about that visit pacer said: "There were about 17 of us who went away a few year to commemorate the 1868 tour, very proud to win this award."
Notably, only one bowler conceded fewer than Scott Boland (7 runs) in men's Tests while taking six or more wickets in an innings - Jermaine Lawson's 3 runs in 2002 against Bangladesh.

The fourth Test will be played in Sydney on January 5.