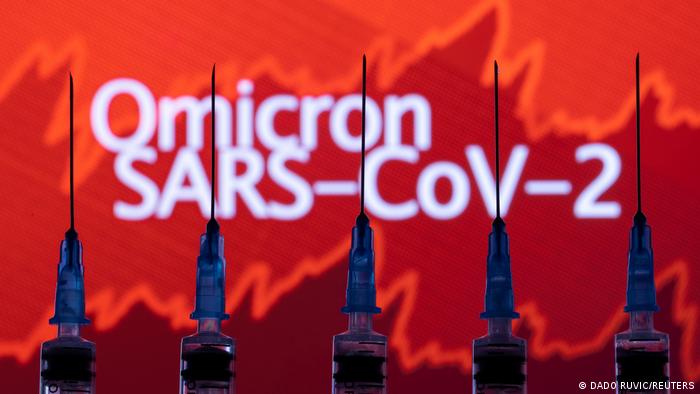 Fifteen of the mutations are in a part of the spike protein that binds to specific antibodies and to ACE-2 receptors. The coronavirus uses ACE-2 receptors, which can be found in our noses for instance, to enter the body.

Microbiologists think that omicron's mutations may make it easier for the virus to infect us via ACE-2 receptors. They say it is also possible that the new variant evades our immune systems better than other variants.

As a result, researchers are looking at three specific mutations in what's known as a Furin cleavage site.

Furin is an enzyme which viruses, such as SARS-CoV-2 but also influenza, dengue, HIV and many others, need to become fully functional — it basically helps the virus to develop as a disease in your body.

So, if omicron finds it easier to infect us and become fully functional, scientists say that it may also spread quicker — it will have a higher transmission rate.
Uncertainty remains over omicron's effect

We've seen high infection rates due to omicron in some parts of southern Africa. That suggests that these are all plausible theories. But they are only theories at this time. They have yet to be proven through scientific studies. And those studies will also have to be verified.

"It is not yet clear whether infection with omicron causes more severe disease compared to infections with other variants, including [the delta variant]," said the World Health Organization (WHO) in a written statement to DW on Tuesday (30.11.2021).

"Preliminary data suggests that there are increasing rates of hospitalization in South Africa, but this may be due to increasing overall numbers of people becoming infected, rather than a result of a specific infection with omicron," wrote the spokesperson.

It is also unclear — but possible — that doctors may have to adjust therapies to treat people who become severely ill with the omicron variant. For example, the new variant may not respond to treatments currently being used to treat patients sick with other variants. Scientists call this immune, vaccine or treatment evasion.

"There is currently no information to suggest that symptoms associated with omicron are different from those of other variants," the WHO told DW. "Initially reported infections were among younger individuals who tend to have more mild [infections]. But understanding the level of severity of the omicron variant will take days to several weeks."

Omicron shares three mutations with the delta variant. Although existing antigen and PCR tests can detect the omicron variant, one of these mutations may be affecting our ability to detect the variant by counting antibodies.

How effective are vaccines against omicron?

Scientists say they need more data before they are in a position to publish any conclusions.

The chief executive officer at vaccine manufacturer Moderna has also warned there may be a "material drop" in the efficacy of existing COVID vaccines against omicron. But Stephane Bancel could not say by how much.

"We need to wait for the data," Bancel said in an interview with the Financial Times on Tuesday. "But all the scientists I've talked to say, 'This is not going to be good'."

Pfizer's chief scientific officer, Mikael Dolsten, meanwhile, said in an interview in STAT, a science and health publication, on Tuesday that his company hoped that booster shots would give sufficient protection against the omicron variant.

BioNTech-Pfizer, Moderna, and Johnson & Johnson are among the vaccine producers trying to develop a vaccine tailored to the omicron variants.

"The vaccine should hold well in terms of preventing hospitalizations," said Professor Salim Abdool Karim. But that was just a "likely" scenario, he added, based on how effective vaccines had been against other variants in the past and on the information we have about omicron so far.

In a report published on November 28 the WHO wrote: "Despite uncertainties, it is reasonable to assume that currently available vaccines offer some protection against severe disease and death" that may be caused by the omicron variant.

As of November 28, the WHO said there had been no reported deaths due to the omicron variant. The variant was first detected in the second week of November.

When DW asked on November 30 whether any deaths had been reported in the intervening days, the WHO did not give specific numbers but wrote in its statement that "all variants of COVID-19, including the delta variant that is dominant worldwide, can cause severe disease or death, in particular for the most vulnerable people, and thus prevention is always key."