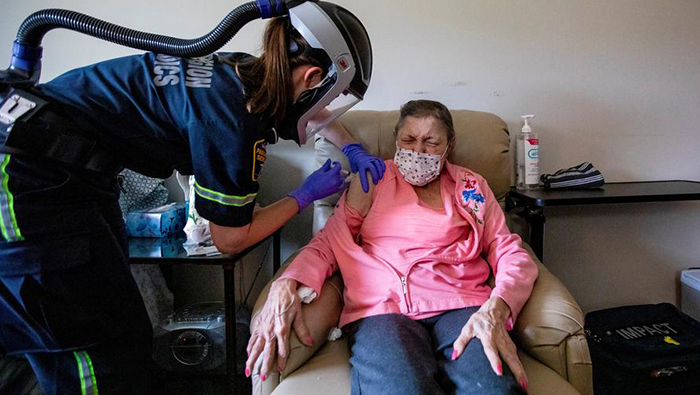 London: Moderna's chief executive predicts that existing vaccines could be be less effective at tackling the omicron variant than earlier variants of the coronavirus.

Bancel said the high number of mutations on the spike protein of the latest variant may mean it isn't picked up by vaccine-induced antibodies.

"There is no world, I think, where [the effectiveness] is the same level... we had with Delta," Bancel told the Financial Times newspaper.

"I think it's going to be a material drop. I just don't know how much because we need to wait for the data. But all the scientists I've talked to... are like 'this is not going to be good.'"

Bancel said his company could deliver between two billion and three billion doses in 2022. However, he said it would be dangerous to shift all production to an omicron-specific shot with other viral strains still in circulation.

The Moderna chief executive's comments underline fears that vaccine resistance in omicron could prolong the pandemic, leading to more sickness and hospitalisations.

News of omicron's emergence had already wiped roughly $2 trillion off the value of global stocks on Friday. Although there was a recovery during Monday's trading, Bancel's comments Tuesday contributed to renewed market uncertainty.

The director of the UK's Oxford Group, which developed the AstraZeneca vaccine, has expressed optimism that the variant won't result in a "reboot" of the pandemic.